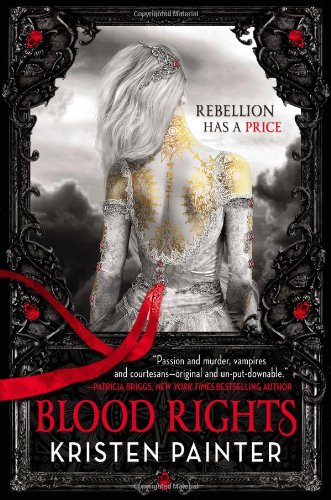 “Kristen Painter’s new trilogy, House of Comarré, looks like another vampire romance. Don’t let the beautifully crafted cover fool you. This is not just a typical romance. . . . Blood Rights certainly gives us the traditional set-up with a beautiful yet haughty woman meeting a roguish man—but after this the formula begins to metamorphose this novel into an urban fantasy with a gothic bent.”

Vampires remain popular. During the many decades of their appearance in the pages of books, comics, and poems, the basic story of the living undead has developed and expanded into its own genre while appearing in many literary genres ranging from classic horror to romance novels to science fiction and fantasy.

We now have tales about monsters who revel in their blood lust, cursed creatures who struggle to maintain their humanity, romantic heroes and heroines who offer their lovers eternity, and even some coldly calculating aristocrats who rule households and companies.

Readers follow the adventures of hunters who are doing god’s work or seeking personal revenge, be these mere mortals, rival vampires, or other supernatural creatures. Don’t forget the victims for whom we should feel sympathy and flood vampire stories with their grief, naiveté, and blood.

At first glance, Kristen Painter’s new trilogy, House of Comarré, looks like another vampire romance. Don’t let the beautifully crafted cover fool you. This is not just a typical romance. This first book, Blood Rights, certainly gives us the traditional set-up with a beautiful yet haughty woman meeting a roguish man—but after this the formula begins to metamorphose this novel into an urban fantasy with a gothic bent.

Chrysabelle is a comarré, a bred blood slave who has been raised then sold into the service of a noble vampire for the past century. Comarrés have been around for centuries and are traded and possessed as signs of power and wealth; however, their destiny is controlled by older members of their bloodline that breed, raise, and then sell them. Ms. Painter’s greatest achievement in this trilogy is the creation of this creature, fully human in many ways, and yet completely trapped in the dark world of the vampire.

At several points in the story, the metaphor of a geisha is used to explain these mortals to others, but it is only a weak comparison at best. How comarrés were created and why is never mentioned, though apparently there had been some deal made between vampires, mortals, demons, and angels. While these blood slaves have their own culture and houses, they are revealed to us only in bits and pieces, leaving us with many questions. This is frustrating, because it is Chrysabelle’s very nature her being a comarré that fuels the story.

What we do learn is that comarrés need vampires. Training can be overcome and Chrysabelle’s desires to leave her vamipiric master are evidence of this. Social expectations can be ignored in light of what she does to survive, such as adjusting to new clothing and new companions.

But no matter what she does, Chrysabelle knows that she is weaker and will age and die without the regular draining of her blood and receiving a vampire’s bite or kiss. Her freedom comes at a direct cost to her life if she does not find a vampire to serve in the fashion she has been trained. Chrysabelle makes a clear choice: to be weaker and live for a short time than to risk being discovered by vampires who are hunting her for the murder of her former master.

But then again, these choices are not entirely in our hands, as Chrysabelle learns when she meets Malkolm, or Mal, as he prefers to be called, who nearly fits into the model of romantic hero. Mal is an outcast who maintains an arrogant air of confidence reacting to her as comarré, feeling his noble bloodline scream out to possess her. But his existence is a struggle to fulfill his need for blood against a curse that easily forces him to kill when he feeds.

We discover that this is no simple curse but two curses working in unison that turn his victims into voices urge him to kill, kill, kill. We learn more about these curses as the plot progresses, but at the end new revelations about Malkolm’s principle tormentor just raises more questions.

Leaving your reader with questions is a good idea if you want that person to buy more books in your series. Too many questions raised, however, and you will not give them sufficient information in order to identify sufficiently with any character nor to wonder what happens next.

This is a big problem for Chrysabelle because her “before” life wasn’t very difficult. An exceedingly long life, superior strength, clothes and possessions that even the wealthy mortal could only dream about, and what does she have to give up but the blood that can kill her unless it is drained every few days? In her own words, her former master was a “good patron,” and she didn’t want to hurt him in any way. Her desire to leave her people is for personal autonomy alone.

Tatiana’s fight against the patriarchal norms of vampiric society, assumed but not explained, is more engaging than the comarré’s woes. A creature of exquisite power, she is forced to endure demonic torments and play political games to get her own people and her creator to take her seriously. Her evil is not tempered because of this pseudo-feminist agenda, but instead strengthened by it as she harms anyone, female or male, in her path. The revelation of her true identity disappoints because it reduces her to a caricature of mothers.

Malkolm’s plight is more touching because he seems unable to get what he needs to survive without destroying another person. The fact that as a vampire Malkolm is willing to fight his nature makes him more agreeable to the reader—even as we are horrified by him. Learning more about his personal history in the last third of this book, our empathy strengthens as we see a good family man brought low by monsters. What begins as the tale of one woman to find freedom and clear her name really turns into the sad story of a family and one man’s eternal nightmare.

The House of Comarré series should really turn around these blood slaves and their lives, their culture, and their role in helping vampires maintain control over their blood lusts so that our mortal world can go on. Our eyes should be trained on Chyrsabelle’s fight and the secrets her people are keeping. By introducing the romantic tradition into the novel, Ms. Painter has distracted us from both our heroine and the main villain around whom we originally believe the series will revolve.

Here’s to the hope that the next book will get back on track, drawing us deeper into the comarrés’ vampire world.