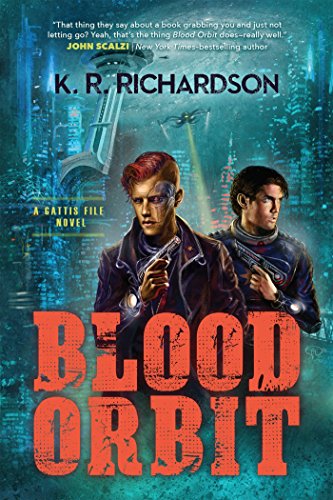 Sixteen people are found brutally murdered in an illegal gambling club in Angra Dastrelas, the corrupt capital city of the corporate-owned planet Gattis. After stumbling across the gruesome scene with his training officer, rookie cop Eric Matheson is assigned to the investigation as the sole assistant of the Chief Investigating Forensic Officer, Inspector J. P. Dillal.

Dillal, Matheson discovers, is a surgical experiment in recovery, a cybernetically enhanced forensic investigator whose implants are still coming online and whose flesh is struggling to heal in the process. Cool and secretive, Dillal guides Matheson through an investigation that embroils them in racial unrest, pushback from members of their own police force, and unresolved tensions from each man’s past.

In a system where police enforce corporate will instead of the law, can Matheson and Dillal survive to identify those responsible for the club murder and thereby prevent a wholesale racial crackdown by the corporation’s military force?

Blood Orbit is a science fiction police procedural by K. R. (Kat) Richardson. The author of nine paranormal detective novels that comprise her Greywalker series, Richardson now moves from urban fantasy to science fiction noir in an interesting exploration of the themes of corporate greed, racial tension, and police corruption in a dark, futuristic setting.

Matheson and Dillal are appealing protagonists. Young and idealistic, Matheson is an off-world foreigner, a shashen, distrusted by the locals and resented by his fellow police officers for jumping the queue. Dillal, on the other hand, is a biracial product of Gattis, half-Dreihleen and half-Ohba, alienated from both sides and loathed by his peers as a surgical abomination.

While the characters are solid and the police procedural component is handled well enough, Richardson’s choice of hard science fiction as the sub-genre of her new series leads to stylistic problems that make the novel slow to read.

Her prose contains too much set dressing in the first half of the novel, a common problem with many universe builders—too many repetitive details that attempt to place the SF hardware, the futuristic ethos, and the unfamiliar races of this far-off planet.

As one of many examples, while she establishes the unusual characteristics of the Dreihleen well enough at the outset, she continually ends a paragraph of dialogue with an explanation of what their accent sounds like:

“You’re a police,” she said. “You’re chase this thing at Paz.” Sounds buzzed against her teeth: “Zis” and “ting.”

Fine at the beginning, but before long these repetitive phonetic renderings become an annoyance. Compounded with too many stage directions for the characters as they move about the set, including multiple arm movements, eye movements, and shifting expressions, along with the ubiquitous pink pus leaking from around Dillal’s ocular implant, the result is an untidy narrative style that slows down the pace and exhausts the reader’s patience.

If Richardson is able to tighten up her technique in the next Gattis File novel, it will definitely be worth adding to our watch-for list. The primary characters, Matheson and Dillal, are quite engaging and have lots of room for development in subsequent outings. The story, once it finally geared up, was very good. The premise of the novel—and the series to come—is quite attractive.

There’s plenty to like in Blood Orbit, and more than enough here to bring readers back for K. R. Richardson’s next installment.