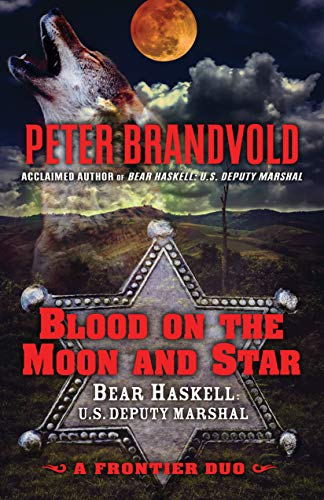 Western novelist Peter Brandvold brings readers a twofer between the covers of his new book Blood on the Moon and Star: A Frontier Duo: "Shootout in Julesburg" and "Bullets, Bruins & a Lady Called Chance."

U.S. Deputy Marshal Bear Haskell stars in both tales. Six and a half feet tall and broad as a barn door, he wears a necklace of bear claws taken from the grizzly he won a fight with. That's why they call him Bear.

There's plenty of gritty action on the pages to satisfy the most dedicated Old West fans, but plenty of explicit sex, too, the kind of erotica not usually found in traditional Western novels.

John Wayne this is not. Clint Eastwood this is not. Butch Cassidy and Sundance Kid this is not. Everyone knows they visited with those upstairs girls in the saloons, but they did so behind closed doors. We all know what Miss Kitty's job was in the TV show Gunsmoke. But she didn't do it in front of everyone.

Chapter one of "Shootout in Julesburg" starts with prisoner Jamie Lockhart locked up in the Hell Hole at the Colorado Territorial Prison in Trinidad for killing the woman his father intended to marry following the death of Jamie's mother. Furthermore, he's promised to do the same to his father, a sheriff in another county, as soon as he gets out.

Jamie's prison cell is dark, cold, filthy, and it stinks:

"He'd been in the dungeon for the past six days. Six days after a ten-day stint a little over a month ago for gouging out another prisoner's eye and shoving it down his throat. He moved only as far as the chain would allow, eating only bread and water, hoping a rat would drown in his water bucket during the night so he could fortify himself with meat."

He's wakened in the night by a prison guard who enters his cell to help him escape. When his cellmate asks questions, he's met with a broken neck courtesy of the guard.

Jamie and the guard pass other guards, all dead, and climb a rope ladder over the wall. Once outside the prison, Jamie snatches up a fist-sized rock and rams it into the forehead of the guard then beats his skull to a bloody pulp, grabs his boots and gun, and makes his getaway alone.

U. S. Deputy Bear Haskell, who has been assigned to find the fugitive and bring him back, spends all of chapter two in a three-room suite at the Larimer Hotel in Denver with a 19-year-old girl he's just met on the train from Kansas City. What they do in those rooms is described in meticulous detail by the author and is further commented on by Haskell and referred to incessantly throughout the next chapters.

Fair warning: This book might not be everyone's bucket of rye, and it's definitely not for the young'uns.

Moving on, in "Bullets, Bruins & a Lady Called Chance," Bear is sent to Dakota Territory to find the killer of two prominent businessmen, the postmaster, a U.S. deputy marshal, and the sheriff. But old Bear has never met a woman he didn't take to bed or take the time to leer at, so it's a while before he completes his mission. Cussing, brawls and shoot 'em ups abound along the way.

The best part is the way the author pulls the reader right into the story and onto the streets of the historic Old West. Brandvold is the author of more than 100 westerns, some written under his own name, Frank Leslie. His books have been published by Berkley and various independent houses over the past many years.

The extent of his knowledge of Old West history and trivia is impressive, and his books are peppered with authentic descriptions of guns, fashions, buildings, towns, and streets. When his character walks down historic Colfax Avenue on Capitol Hill, so does the reader. They can clearly see what Brandvold's fictional characters are wearing, eating, where they live and what they're riding in or on. They can hear the creak of leather saddlery, smell the stables and barns, hear the fiddle and piano music wafting out the batwing doors.

"Dogs were barking, men were laughing, and distant train cars were loudly coupling while cattle lowed in the stockyards down by the tracks. Wagonloads of coal were being hauled by clopping Percherons east toward the gallant mansions decorating Sherman Avenue, where the moneyed lived far from the unwashed crowds dwelling in relative hovels down along Cherry Creek."

You are there as certainly as if you'd actually lived it. Make no mistake, author Peter Brandvold is keeping the Western genre alive and kicking.