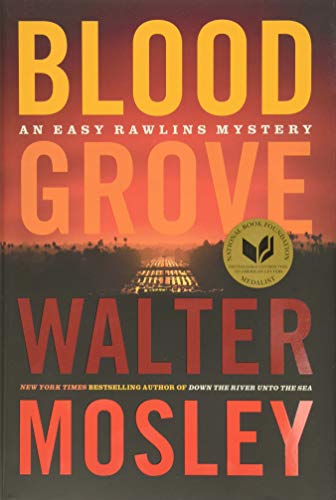 “What’s perhaps most remarkable about Blood Grove—as with all Easy Rawlins novels—is Mosley’s undiminished gift for embedding the poignant messaging of the protest novel in hard-boiled crime fiction without ever sacrificing punch or pace. ”

The archetypal hard-boiled detective was Dashiell Hammett’s Sam Spade, a licensed private investigator who counted among his signature gifts and defining characteristics his ability to throw and take a punch, his flexible approach to the law and unwavering fidelity to his own moral compass, a wisecracking cynicism that belied his capacity for gutting personal loss, and a clear-eyed common-sense logic that got the job done without the dazzling parlor-room deductive genius of Hercule Poirot.

Even as Spade’s memorable turn in The Maltese Falcon birthed a genre typified and often diminished by the careerism of his successors, it failed to launch a career for Spade himself. The subject of one classic novel and three forgettable short stories, Spade made his lasting impression uncharacteristically quickly for a hard-boiled detective whose name still resounds nearly a century later.

The undisputed heavyweight champ of the career P.I.s who have followed in Sam Spade’s wake is Walter Mosley’s Ezekiel “Easy” Rawlins, whose travails have carried the hard-boiled genre into the bracing realm of the protest novel, plumbing the depths of American racial conflict and injustice and charting new territory for Black male heroism. The only contemporary who comes close to matching Mosley’s Rawlins for the unerring wallop of his narrative, the embattled moral authority of his voice, a permanently fixed place in the lingering legacy of internal colonialism, and a seemingly inescapable compulsion to contend with the burdens of his country’s violent past and present, is Ken Bruen’s beleaguered Galway gumshoe Jack Taylor.

Easy Rawlins returns in the 15th installment in his ongoing story with the taut and enthralling Blood Grove. In this latest work, Mosley continues to mine undiscovered dimensions and shades of meaning from Easy’s adventures, reflecting depths of the character that no single, or perhaps even short series of novels would be likely to reveal.

Blood Grove picks up Rawlins’ story in 1969. Mosley sets the scene and affixes his tale in time as vividly as ever: “The LA riots were almost four years gone but the devastation was still apparent. Burned-out businesses and more pedestrians than populated the streets of the rest of the city. Men and women who were the heirs of slavery trod down the avenue looking as if they were still bearing up under the heavy loads of another man’s wealth.”

Meanwhile, Easy’s difficult journey toward domesticity and his struggle to build a safe environment in which to raise his 13-year-old adopted daughter Feather despite the ever-present dangers of his profession have considerably advanced since the conclusion of the last Easy Rawlins novel, Charcoal Joe. Easy is still aching from the loss of his common-law wife Bonnie to exiled African prince Joguye (both of whom Easy helped hide from Joguye’s would-be assassins in Charcoal Joe), but his beloved Feather remains by his side, and he’s arrived at a truce of sorts with Feather’s nettlesome yellow dog Frenchie.

Now pushing 50, Easy is 21 years older than when we first encountered him in Devil in a Blue Dress as a recently mustered out World War II veteran lately laid off at Champion Aircraft and reluctantly embarking on a new career as a P.I. He is still receiving favors as often as cash for his detective services. As Blood Grove begins, Easy has secured a 99-year lease on a gated house high in the hills outside L.A. from a grateful client, along with a canary-yellow 1968 Rolls Royce Phantom VI to traverse the city streets.

As anyone familiar with Rawlins’ past adventures—or the bitter realities of being Black in America—might suspect, a Black man without a chauffeur’s cap can hardly cruise the Sunset Strip in 1969 in a mint Rolls-Royce without drawing near-constant harassment from the police. Even with colleagues on the force who regularly leverage his expertise, Easy’s relationship with the LAPD continues to vary narrowly from prickly to poisonous. At its outset, Blood Grove stops and sputters, virtually unable to get rolling, until Easy temporarily trades the Rolls for a seemingly more race- and class-appropriate ’58 Pontiac that allows him to move relatively freely about the city.

When the case that drives Blood Grove kicks in, it’s a doozy. No longer an accidental P.I. as in the early novels, Easy is now a partner a three-man detective agency. Alone in the office and hoping for a few quiet days spent idly observing the horticultural pursuits of his hippie neighbors from his office window, Easy meets a new client arrives who arrives unannounced. Craig Kilian, a young, white, shell-shocked Vietnam vet, slips silently into the office and tells Easy a muddled story of stumbling upon a man assaulting a woman in an orange grove. Kilian says he stabbed the man to death before being hit from behind and knocked unconscious, awakening later to find himself alone with no evidence that any of these events occurred, except for the pain in his head and the disappearance of his dog.

Kilian wants Easy to find out what really happened. Doubting that he’s hearing the whole story—or even the whole story as the confused Kilian understands it—Easy agrees to take the case because of the empathy he feels for the teller, his understanding of the damage war has done to this young man, and the depth of their common experience in spite of their equally evident differences.

“I’m a black man closer to Mississippi midnight than its yellow moon,” Easy muses. “Also I’m a westerner, a Californian formerly from the South—Louisiana and Texas to be exact. I’m a father, a reader, a private detective, and a veteran. I’m sure as shit a vet. From the sand-strewn corpses of D-day (on that day my race, for a brief moment, was all-American) to the Battle of the Bulge with its one hundred fifty thousand dead, to the masses of skin-stitched corpses, living and dead, at Auschwitz-Birkenau . . . Because of that bloody history Craig Kilian was as much my brother in blood as any black man in the U.S. I had to help him because I could see his pain in my mirror.”

Kilian’s story frays quickly and unravels completely over the next few days, as the case expands to encompass murders and mobsters, femmes fatale, and misbegotten heists. The complications of the web into which Easy has been drawn become apparent as the violence and danger intensify, the bodies pile up, and a living, breathing blunt instrument of a gangster bashes his way into the fray, demanding that Easy find a woman he’s already looking for.

Thirty-one years since the publication of Devil in a Blue Dress and Easy Rawlins’ arrival as an indelible presence in American fiction, familiar elements of his ongoing story remain prominent and powerful. Perhaps foremost among them—alongside Mosley’s unflinching and ever-insightful take on what it means to walk through life in America wearing black skin—is his acute portrayal of mid-century Black Los Angeles as a product of the Great Migration, and the institutionalized violence, deprivation, and degradation that necessitated it.

Black Los Angeles remains, in Mosley’s vision, east Texas and southwest Louisiana moved west, with the culture and shared experience of Houston’s Fifth Ward more meaningful cultural determinants in Watts and South Central L.A. life than anything native to California. Easy and his memorable cohort, from his lethal and loyal best friend Mouse to Mouse’s redoubtable wife Etta Mae, the formidable Fearless Jones, the cowardly genius Jackson Blue, the fellow vet Christmas Black, and the mystically omnipotent Louisiana witch doctor Mama Jo, live with one foot planted in both worlds, even though all, by the late ’60s, have lived in L.A. for decades.

But perhaps the element of Easy’s experience that emerges more strongly in Blood Grove than in any Easy Rawlins novel since Devil in a Blue Dress is the persistent presence of Easy’s war experience in his life, reinvigorated by the trauma that another generation is enduring in the bloodiest years of the Vietnam war. “There were thousands of young men like Craig coming back from Vietnam,” Mosley writes. “Innocents, killers, and children all rolled up into the war-hardened bodies of veterans who had no idea what they’d done or why.”

The common experience of war fuels Easy’s sometimes difficult, but also deeply rewarding interactions in a veterans-only bar he discovers as he pursues Kilian’s case. It informs his ever-evolving understanding of himself a half-century into his life, and his own progression as a transplanted Black man, a devoted father, a steadfast friend, a spirited and spurned lover, a moralist and fatalist, and an accomplished private detective with voluntary but unshakable allegiances. “In the mirror there were the faces of many men: a middle-aged black man in fair shape but worn; a veteran not unlike Craig Kilian; a free agent who only took orders out of love, duty, or, far too often, as a consequence of guilt.”

What’s perhaps most remarkable about Blood Grove—as with all Easy Rawlins novels—is Mosley’s undiminished gift for embedding the poignant messaging of the protest novel in hard-boiled crime fiction without ever sacrificing punch or pace. Mosley is often compared to the criminally undervalued 20th-Century Black author Chester Himes, whose early protest novels If He Hollers Let Him Go and The Lonely Crusade cut particularly deep. Though the voice of Easy Rawlins shares some of the knowing fatalism and trickster edge of Himes’s classic Harlem detectives Coffin Ed Johnson and Gravedigger Jones, it has implanted itself in the American consciousness by generously divulging secrets Himes’s cocky cops played close to the vest.

Still, Mosley owes Himes a debt many times repaid. Blood Grove does its many antecedents proud—not least among them, Easy Rawlins’ formidable first 14.