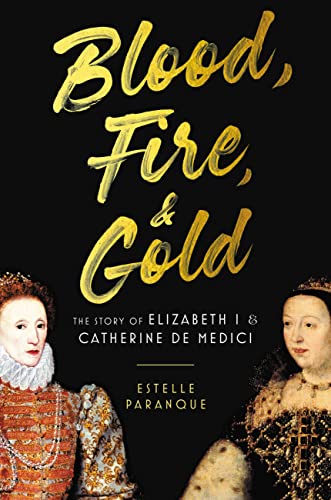 “Blood, Fire & Gold is a story of palace intrigue, religious conflict, interpersonal and family relationships, and geopolitical rivalry pitting Elizabeth I and Catherine De Medici against each other.”

Sixteenth century Europe was dominated by the interaction of religion and geopolitics, and two of the most skillful “statesmen” of that time were women: England’s Queen Elizabeth I and France’s Queen Mother Catherine De Medici. Estelle Paranque, an assistant professor of history at Northeastern University in London, in Blood, Fire & Gold provides a fascinating, detailed look at the personal and political relations between Elizabeth and Catherine as they sought to promote the interests of their respective countries and religions.

Blood, Fire & Gold is a story of palace intrigue, religious conflict, interpersonal and family relationships, and geopolitical rivalry pitting Elizabeth I and Catherine De Medici against each other. Elizabeth ruled Protestant England. Catherine’s sons ruled Catholic France. Within each country, religious divisions sowed political discord and division. Elizabeth held captive and later ordered the execution of Mary (Stuart) Queen of Scots, who plotted to become Queen of England and to reinstate the Catholic religion. France, meanwhile, suffered from religious civil wars as Catholic forces struggled against their Huguenot rivals.

Elizabeth held out the possibility of a dynastic marriage with Catherine’s son while simultaneously providing support to Catherine’s Huguenot enemies. Catherine sought the release of Mary Stuart and supported Catholics in England. Both Elizabeth and Catherine feared the growing power of Phillip II’s Spain, also a Catholic power.

Paranque shows how both women emerged to achieve power in “the shadows of their respective courts” where they learned about diplomacy, warfare, and domestic politics. They both were students and later practitioners of power. And while both women were devoted to their respective religions, religion in the end took a backseat to geopolitics. For both, raison d’etat (reasons of state) overruled their personal and religious preferences.

Paranque details the machinations of both women rulers as they “use[d] their subjects to go at each other’s throats [and] play[ed] with the lives of men they had at their disposal” to prove “their legitimacy and ability to rule in a male-dominated world.” Their communications to each other via letters and ambassadors feigned friendship while promoting their and their countries’ self-interest.

And in the the 16th century, raison d’etat included dynastic marriages. Both France and Spain courted Elizabeth, and the “virgin queen” used this to England’s advantage. At the dawn of the 16th century, Spain was the rising power, and the branches of the Habsburg family ruled both Spain and Austria and held the title of Holy Roman Emperor. Diplomacy was used to facilitate marriages and to prevent them—all for reasons of state.

Paranque’s book details the many plots and subplots by various factions in England and France, the vicious and cruel religious warfare in both countries and throughout Europe, and how Elizabeth and Catherine deftly, though not always successfully, advanced their respective interests through their “passion, resilience, and determination.”

The book culminates in the execution of Mary Queen of Scots in 1587—insisted upon by England’s Parliamentary leaders and Elizabeth’s court advisers, but with Elizabeth’s express approval—and England’s defeat of the Spanish Armada in 1588. England’s power now rivaled that of Spain. Elizabeth emerged the victor in her rivalry with Catherine, but as Wellington said about his victory at Waterloo, it was a close run thing. And, as Paranque notes, it was Elizabeth’s rivalry with Catherine “that ultimately shaped the course of sixteenth-century European politics.”