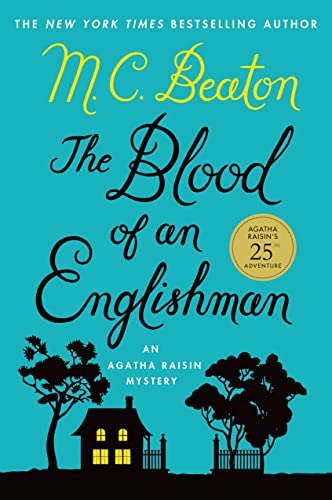 “In this sparkling new entry in M. C. Beaton's New York Times bestselling series of modern cozies, Agatha Raisin once again ‘manages to infuriate, amuse, and solicit our deepest sympathies’ as we watch her boldly make her way through another murder mystery.”

In this book, she fantasizes about becoming a farmer’s wife—Agatha, who has a gardener!

In this outing she accompanies her best friend, Mrs. Bloxly to a nearby village for the annual Christmas Pantomime. This is a uniquely English type of musical comedy stage production for the family. It has songs, slapstick comedy, and dancing with a story loosely based on a well-known fairy tale. Worst of all for Agatha, it has a history of audience participation, where one is expected to sing along with certain parts of the music and shout out phrases to the performers.

It isn’t a place where a grisly murder takes place albeit off, or rather under, the stage.

The victim is the village baker who plays the part of an ogre. Agatha finds that behind his genial front, this role is not much of a stretch for him.

It’s easy to read a detective’s adventures and feel smugly superior. What separates Agatha from us is her terrier-like tendency to pursue an answer. Beaton uses Agatha to show the reader to see that everyone has an Achilles heel. And Agatha’s is so much fun to watch in action.

Agatha is from a generation that truly believes she is not complete without a man. But she has made a packet of money in London in advertising, and has retired to a life in the Cotswolds under her own power. Readers must want to buy Agatha that famous T-shirt: “A woman needs a man like a fish needs a bicycle.” Agatha may envy married women, but married women envy her—she controls her own life.

How can you dislike a woman who feeds her cats’ fresh fish before she microwaves an execrable Indian curry for herself?

And so the reader continues to root for the heroine where we see a part of ourselves.

The Blood of an Englishman is Agatha's 25th adventure, and you'd think she would have learned by now not to keep making the same mistakes. Alas, no—yet Agatha's flaws only make her more endearing. In this sparkling new entry in M. C. Beaton's New York Times bestselling series of modern cozies, Agatha Raisin once again “manages to infuriate, amuse, and solicit our deepest sympathies” as we watch her boldly make her way through another murder mystery.