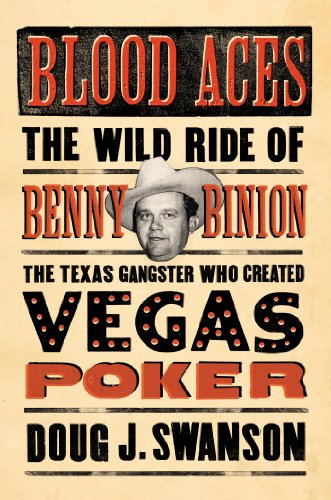 “say a prayer of gratitude for Benny Binion. He’s the nicest gangster you never met.”

The Rolling Stones sang about sympathy for the devil, but in his new book, Blood Aces: The Wild Ride of Benny Binion, the Texas Gangster Who Created Texas Poker, Dallas Morning News reporter, Doug J. Swanson, actually makes you feel it.

The devil in this book is Benny Binion, a Texas planes drifter turned Dallas grifter, who murders his way to the top of Texas gambling, and then reinvents himself as a beloved founding father of Las Vegas.

Remarkably, as Swanson describes in exquisite prose, Binion was always beloved, even when he was maiming and killing his rivals in Dallas. He had a generous nature to go along with his violent side, made friends and kept them, and won the allegiance of the gamblers whose money he took and the politicians who accepted his bribes.

You might recognize the name of Federal Judge, Harry Claiborne, who sat on the bench in Las Vegas when he wasn’t sitting in bars with Binion, a beloved friend.

You might also recognize the name of Steve Wynn, one of the best-known builders of modern Las Vegas, another dear friend.

Binion enjoyed himself, yet within limits. There was no evidence that he cheated on his wife, despite all the prostitutes and playgirls in his realm. He also was a devoted father, trying to provide as normal a home life as he could for his large gaggle of children, especially after the emotional and financial deprivation he had endured as a youth.

Doug J. Swanson writes lovingly and brilliantly about Binion, the bustling city of Dallas he helped create, and the city of Las Vegas, which Binion helped found. His Vegas casino, The Horseshoe, was eventually bought out by corporations after his passing when his family could not figure out how to make the thing work.

Binion’s only conviction:  Tax evasion, which put him in Leavenworth for five years. But as Doug J. Swanson recounts, he quickly adapted to prison life and seemed to enjoy that almost as much as running his gambling operations in Dallas and then in Las Vegas.

The overall portrait of Binion is of a streetwise operator, who could assess people perfectly. The fact that his casino staff routinely maimed and even killed people who broke the rules is something the world appears to be willing to overlook. If you don’t go to Vegas, and especially if you don’t go downtown, the name Binion’s Horseshoe might not mean much to you. But Binion also started the World Series of Poker, by bringing together various poker legends from Texas and other points on the map. If you’ve ever wondered what was coming down the river, you can thank Benny Binion.

And if you’ve ever waited for the river to fill an inside straight, say a prayer of gratitude for Benny Binion. He’s the nicest gangster you never met.