Blind Tom: The Horse Who Helped Build the Great Railroad 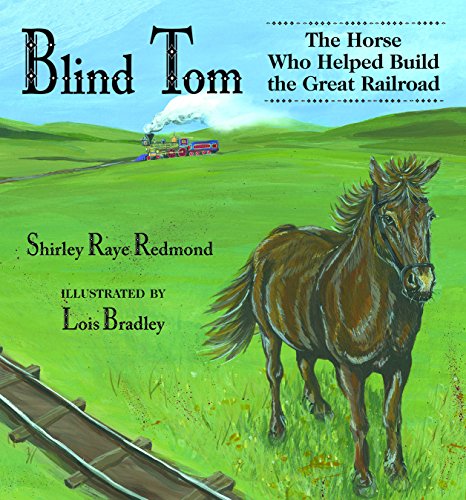 Blind Tom: The Horse Who Helped Build the Great Railroad is a quiet treasure.

In fact, the book is so quiet that Blind Tom doesn’t even appear until almost halfway through the book. Before he makes his entrance, author Shirley Raye Redmond takes the time to carefully set the context.

In a conversational question-and-answer format, she helps readers think about the need for the Great Railroad, the role that Abraham Lincoln played, the background of the workers, and the hard work of pulling the flat cars filled with iron rails and spikes.

The light-bulb moment comes when she finally asks, “What do you suppose could help pull the flatcars?” The answer: “Horses!” And when she asks who the leader would be, the answer becomes apparent: “Blind Tom!”

At this point, Blind Tom becomes the physical and emotional center of the book. Although he cannot see, he is strong, smart, and a hard worker. He pulls the flatcars to the very end of the track. He listens to the progress. He struggles in the cold and wind.

But author Shirley Raye Redmond does not overload readers with details about Blind Tom. This is key to the book’s success.

Very easily, she could have hyped his fame among the telegraph operators, his appearance in newspapers, and his presence at the railroad’s completion at Promontory Point. But Redmond chooses not to sensationalize Blind Tom. Rather, she allows him to subtly represent every horse that worked on the transcontinental railroad.

Meanwhile, the railroad also becomes a character in the book. As a result, there’s a good chance that many young readers will want to look at the map, the interactive glossary, and the websites.

Blind Tom is an extremely satisfying book. And somehow, it has that “read it again” quality—something quite rare in a nonfiction book. I credit this to the Q&A format. Not only does it keep kids guessing the first time through, but it gives a built-in challenge for second and continued readings.

Lois Bradley’s illustrations also give viewers something to think about. On the one hand, their simplicity allows kids to focus on the key facts. However, in many of the pictures, Blind Tom’s eyes appear to be alert. Whether these are accurate portrayals of blindness, I don’t know. In any case, they’ll prove to be interesting conversation starters.

Blind Tom is just one of Shirley Raye Redmond’s works of nonfiction. Also look for Pigeon Hero and Lewis & Clark: A Prairie Dog for the President.