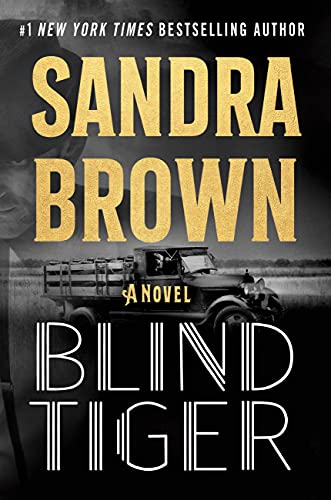 “Blind Tiger is much less than the sum of its parts. It’s a disappointing effort from a chartbusting bestseller author capable of better writing than this.”

When Thatcher Hutton jumps off a train and walks into the town of Foley, Texas, in March 1920, he’s quickly arrested in connection with the disappearance of the town doctor’s wife. Recently returned from the war, he’s a natural suspect, a transient who was seen asking the missing woman about a room for rent.

Thatcher soon finds himself mixed up in a war that erupts between rival moonshine organizations vying for control of the burgeoning liquor market that has been driven underground by Prohibition.

The town mayor and the ragtag Johnson family both head gangs determined to control the distilling and bootlegging operations in the area. But when young widow Laurel Plummer, who has already caught Thatcher’s eye, takes over her father-in-law’s small-time operation and challenges the powerful organizations for a share of the market, Thatcher finds himself in a bind.

Recently deputized by the sheriff after being cleared of suspicion, he’s torn between his growing attraction to Laurel and his dedication to law and order in Foley. Can he protect Laurel from danger and from her own ambition as the bodies begin to pile up and mayhem erupts on every side?

Blind Tiger is the latest romantic suspense novel from Sandra Brown, the publishing juggernaut with 72 New York Times bestsellers to her credit, more than 80 million copies in print in 34 languages, and four film versions of her novels.

It must be understood, right up front, that Brown writes for an audience that enjoys romance with a healthy dose of eroticism mixed in. Despite the period setting and rough-and-tumble action revolving around the illegal liquor war, the hot-and-cold relationship between Thatcher and Laurel is the central focus. The rest is, well, just window dressing.

Brown’s great strength lies in being able to tell a story that moves briskly forward without a lot of extraneous filler to distract or slow the reader down. It’s the kind of novel where you tell yourself you’ll just finish the current chapter and put it down for a bit, then you find yourself halfway through the first page of the next chapter before you realize it. You really should just finish this chapter too, shouldn’t you? Just one more. And one more. And so on and so on.

Her characters also have a lot of potential. As a cowboy who was separated from his ranch by the Great War, Thatcher Hutton offers a chance to consider the forced transition of America from an agrarian, horse-powered lifestyle to one fueled by motor vehicles, business, violence, and greed. As well, Laurel Plummer is a strong female character with resilience and sharp business skills.

Brown’s secondary characters are likewise interesting and filled with possibilities, but the problem here is that she fails to develop them into something other than vehicles for the plot and its attendant suspense. Thatcher, Laurel, and the others are, at the end of the day, lamentably flat.

The biggest problem with this novel, however, lies with the author’s error in judgment in trying to toughen up her story to reflect the brutality of the times. Her graphic depiction of the beating and rape of a woman with designs on the town doctor is nothing less than violent pornography that should have been removed from the manuscript as soon as it was read by her editor.

The novel previously touched on this subject matter in the beating of the prostitute Corinne, later taken under Laurel’s wing and developed into a somewhat interesting secondary character. In this early case, however, the violence was handled offstage. Readers saw the aftermath of the beating and were able to appreciate the despicable treatment of women in these situations without it conflicting with the overall romantic tone of the novel.

That Brown wants to tell a sexy story is a given, and the detailed scenes of lovemaking between Thatcher and Laurel are fine, if that’s what stirs your drink. However, the graphic, fatal beating and rape of Norma Blanchard crosses the line. Either Brown wants to appeal to her romantic suspense audience or she wants to write for the violence-loving noir crowd, but she can’t have it both ways in the same story. It doesn’t work.

With an ending that lingers far too long on fond farewells and the picking up of loose threads, Blind Tiger is much less than the sum of its parts. It’s a disappointing effort from a chartbusting bestseller author with a track record that suggests she’s capable of better writing than this.