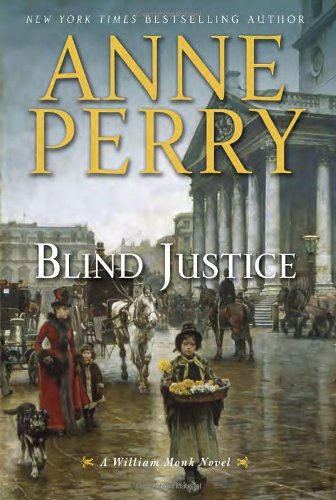 This book revolves around a whopper of a moral problem: What do you do when only you are in a position to stop great evil, at the cost of betraying a promise and ruining your life?

If you take the safe course, you won’t be able to live with yourself, and innocent people will be harmed either way.

Damned if you do and damned if you don’t—the dilemma that faces Sir Oliver Rathbone in Anne Perry’s latest in the William Monk series.

Previously, Sir Oliver was the dynamic a lawyer who fought impassioned courtroom battles with his close friends William Monk, a river policeman commander, and his wife Hester, a crusading nurse.

This trio has worked against the dark social forces and underdeveloped laws of Victorian England for 19 volumes. They always have to fight from a disadvantage, but the light of their rightness and caring has triumphed over darkness every time, just in the nick of time.

Same happens here, but this time Sir Oliver stands at the heart of the struggle. His success as a defender of Justice has elevated him to a judge, only to become “disturbed by his inability to do anything except watch and listen.”

When a financial fraud case with far-reaching consequences crosses his bench—initiated, ironically, by Hester—he realizes he lacks the impartiality required for his job. “One could never be fully impartial and still be human,” he discovers, which spurs him to use the evidence he inherited in a previous book to intervene behind the scenes and tip Justice’s scales in the right direction.

After agonizing over his decision, he takes the honorable but disastrous course that lands him in jail for perversion of justice and then on public trial. Here he learns: “It was different from this side of the picture, very different indeed. How simple it is when the victim is somebody else. Justice is so easy from the blind end, nicely cushioned from everything except the knowledge of an uninvolved conscience.”

Sir Oliver’s conscience becomes plenty involved from both ends and crashes together in the middle. He emerges a humbler, wiser man with changed priorities and lifelong scars.

The story takes place predominantly in the courtroom. It starts with the case that provokes Sir Oliver to overstep his limits then covers his own case in response. His loyal friends do some running around London digging up crucial evidence to save him, but most of the story is cerebral and occurs in confined spaces.

Fans of action will find this setup soporific. Readers who enjoy deep thought and emotional crisis will get an extravaganza of both. Those who love Victorian England will relish Ms. Perry’s presentation of period details. Her mastery of this time and place gives credence to the characters’ moral and legal struggles.

Unfortunately, she’s prone to preachiness, which makes an otherwise gripping story tiresome at intervals. In Blind Justice, however, she adds some freshness with a new character voice, that of Scruff, the mudlark adopted earlier in the series by Monk and Hester. Now 13 and street savvy beyond his parents’ ken, Scruff helps “detect” and contributes critical details to Sir Oliver’s defense.

The narrative ends up edgy because of its constant clash of opposites: dramatic and dull in style, spiritual and material in subjects, privileged vs. impoverished in theme, and always about good against evil. It’s nice to see Sir Oliver featured with Monk and Hester as seconds, instead of the other way around. What will become of him is a question that hopefully be answered in the next book.