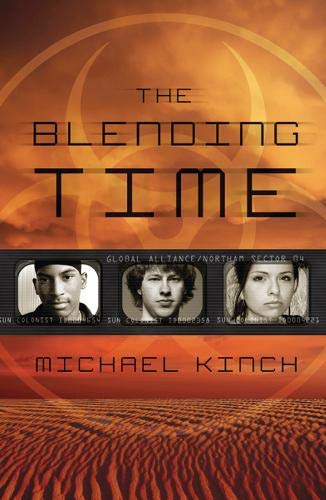 The Blending Time follows the intertwined stories of three kids in various terrible, near-future post-apocalyptic scenarios: Jaym, child of a working-class single mother in a city of such dense population that some other family lives in their home when they’re away at work during the day; D’Shay, child of a ghetto so segregated from the rest of the world that non-African Americans don’t know how to deal with him; and Reya, displaced from the climate-change-induced desertification of her home and forced to live like a prisoner of war in a refugee camp. All of them come from such hopelessness that signing up for a poorly researched and explicated venture into Western Africa sounds like a better plan than staying where they are.

The story starts at that introductory level of brutality, and continues to slide further and further into a tale that takes the children away from their homes and dumps them into a war-torn Africa that’s been so decimated by plagues and power struggles that it’s in a state of near total chaos. They’ve been sent by a humanitarian operation to serve as Blenders—unwanted kids from the outside who have genes unaffected by the massive solar flare that left Africans unable to breed among themselves. Each chapter aggravates their situation in a rolling and unrelenting stream of the worst things of which humanity is capable.

Which does not at all mean that this isn’t a good book. It reads quickly and is full of action and excitement. The three main characters feel real and interact well with each other, forming realistic bonds that hold the story above the level of misery. Their goals are worthy ones, and the ways they come to believe in them are honest and realistic.

But it takes a very long time in a short book for anything even approaching positive to occur, and for some readers, it might take too long. For others, it might be too short of a book as there are segments throughout the story that could have been lengthened; the worlds the kids come from could have been more fleshed out and more deeply explored; and the ending feels like it comes too early, leaving too much up in the air. And it would have been comforting to see the main characters all reunited on the page, though perhaps having it not turn out that way was a deliberate artistic choice to convey that things are still pretty dire—and perhaps to prepare for a sequel.

This is not a book for the tenderhearted, because it doesn’t flinch at showing us how an already terrible situation could continue to get worse, and how that situation affects real people who are stuck in the middle of it. It’s brutal and enraging, and yet The Blending Time makes the reader simultaneously happy not to be there, and uncomfortably aware that events like those that occur in this book are actually happening now.

Yes, The Blending Time could easily be the start of a series. This is Kinch’s first book, and it’s a rough one, but a good one. He’s certainly a name to follow.