Bleed for Me (Joseph O’Loughlin) 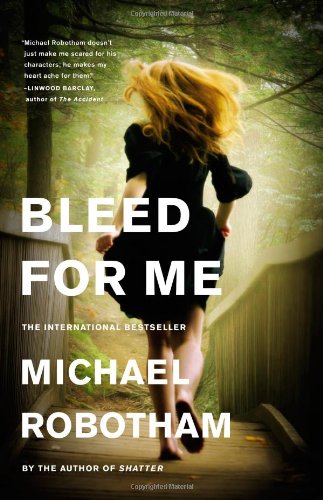 ”Bleed for Me is not only an unnerving, fast-paced psychological thriller, but also an extremely intelligent read by a writer in his prime.”

Psychologist Joe O’Loughlin is being pushed away. His marriage with wife Julianne is in a shambles. Charlie, his eldest daughter, will barely speak to him. And Charlie’s rebellious best friend Sienna Hegarty is getting into more and more trouble, taking Charlie along for the ride.

Sienna, a troubled child, has for years spent more time in the O’Loughlin residence than in her own home. O’Loughlin’s worse fears are confirmed when Sienna turns up at his front door, traumatized and covered in blood. The police find a major piece of the puzzle at Sienna’s house: her father, Ray Hegarty, a celebrated former police officer, murdered.

The blood covering Sienna is her father’s. She can’t remember what happened yet at the same time does not mourn her father’s death. O’Loughlin vows to unearth the dark secrets of Sienna’s mind, hoping his efforts will win back the confidence of a daughter he may be in danger of losing forever. But as the accusations fly, the line between victim and accused begins to blur.

What was going on behind closed doors in the Hegarty household? Is Sienna guilty of the brutal murder? And what part has her charismatic teacher, Gordon Ellis, played in the blood-soaked event? As O’Loughlin begins to make his own inquiries into the murder, each step he takes toward the truth brings him closer to the path of a manipulative killer unlike anyone he has ever encountered.

Bleed for Me begins with the chilling pages of adolescent Sienna’s diary, giving the reader an insight into the young girl’s frame of mind from an early stage in her life; a life of cutting and self-harm:

“when i was eleven or twelve i took a stanley knife from my father’s shed and pinched a roll of flesh on my inner arm before slicing it open. it wasn’t very deep, but enough to bleed for a while. i have no idea where the idea came from, but somehow it gave me something i needed. a pain on the outside to match the inside. i don’t cut often. sometimes once a week, once a month, once i went for six months. in the winter i cut my wrists and forearms because my school blazer will cover the marks. in the summer i cut my stomach because a onepiece will hide the evidence. once or twice I’ve needed stitches but i managed to fix myself, using a needle and thread.

“i bet that makes you shudder but it didn’t hurt so much and i boiled the needed first. when i bleed i feel calm and clear-headed. it’s like the poison inside me is dripping out. even when i’ve stopped bleeding, i finger the cuts lovingly. I kiss them goodnight.

“some are new cuts on virgin skin. others are old wound reopened. razor blades and stanley knives are best. they’re clean and quick. knives are clumsy and needles don’t produce enough blood. you want to know the reason? you want to know why someone would bleed in secret, it’s because i deserve it. i deserve to be punished. to punish myself. love is pain and pain is love and they will never leave me alone in the
world.”

Psychologist Joe O’Loughlin is a fascinating character with clay feet imperfections. He suffers from Parkinson’s disease, a failed marriage, and a family that is nearly completely estranged to him.

He is smart—but not too smart to make him infallible—and sometimes he ends up creating more problems than he can possibly solve. Joe O’Loughlin is a human with his fair share of warts and everyday worries. These characterizations alone make him almost unique among today’s solve-it-quick sleuths, most of whom are barely credible.

Bleed for Me is not only an unnerving, fast-paced psychological thriller, but also an extremely intelligent read by a writer in his prime.