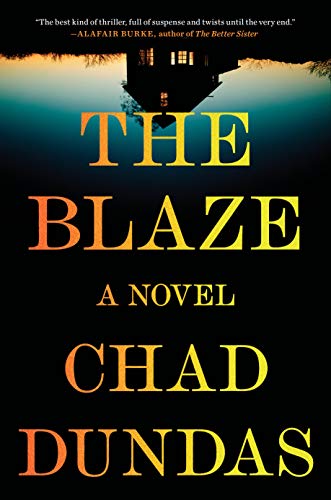 “there’s more than enough here to like that readers will enjoy this one and will certainly want to come back for whatever’s next.”

The amnesia trope is very popular in modern fiction, regularly appearing in novels, feature films, and television programs. Whether it’s a Tami Hoag story, the Jason Bourne series, or the Gilligan’s Island episode where Mary Ann gets hit on the head and thinks she’s Ginger, amnesia provides an easy plot device that enables us to watch the protagonist discover themselves as we discover them.

Such is the case with The Blaze. Army veteran Matthew Rose has lost his memory as a result of an explosion in Iraq. After returning home, he struggles to return to normal life in Florida with his mother and stepfather. When his natural father commits suicide, Matthew must return to his hometown, Missoula, Montana, to settle David Rose’s affairs as executor of his estate.

A return to the city of his birth and upbringing gives Matthew an opportunity to attempt to reclaim much of his lost memory. With the help of his ex-girlfriend, local newspaper reporter Georgie Porter, he revisits scenes of his childhood and adolescence, struggling to piece together scattered memories while contending with a growing sense of dread.

Is there something horrible buried in his past, something involving his late father and their small circle of friends in the neighborhood where he grew up, that has triggered a campaign of arson and murder? Is someone desperate to keep hidden an explosive truth that cannot come to light?

The Blaze is Chad Dundas’s second novel. His first, Champion of the World (2016), was a well-received historical novel set in rural Montana in the 1920s. His switch to a contemporary thriller for his second outing is, in large part, a success.

Matthew Rose is an interesting character, and his struggle to regain his memory keeps us engaged. As an alternate point of view, Georgie is well drawn, and her busy-body nature as a reporter working the city desk helps move the story along.

In fact, the first 100 pages of the novel set a brisk pace as Dundas shows a well-developed talent for storytelling. The middle hundred lag a bit as Matthew’s search for his past seems to flounder somewhat, taking us in apparently random directions, but Dundas brings his threads together in the final third of the novel in such a way that everything adds up and makes sense after all.

A fourth-generation Montanan and resident of Missoula, Dundas uses his setting effectively without drowning us in local color, and his work experience in journalism lends credibility and realism to Georgie’s relentless pursuit of the story.

The Blaze falls a trifle short of being an out-and-out barn burner, but there’s more than enough here to like that readers will enjoy this one and will certainly want to come back for whatever’s next.