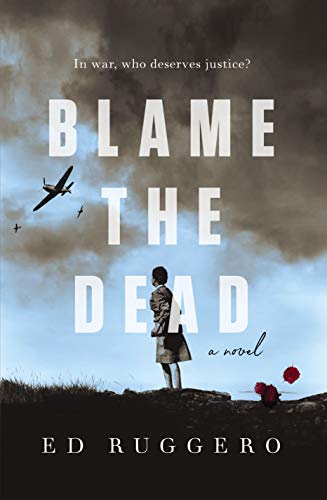 “This book is slated as the start of a new series and holds great promise to be a good one.”

Amid the screaming, bloody chaos of war, what’s one more dead body?

That’s a question to be considered on its own but doubly so if you consider warfare—in this case World War II—to be government-sanctioned murder of thousands around the globe.

The question is considered in Blame the Dead, because no matter what’s going on in the combat theater, the U.S. government does not sanction murder for personal reasons.

So when a surgeon at a field hospital is shot in the head from behind during a scramble for cover during an air raid, his death isn’t written off as just another wartime casualty. It must be investigated, and the killer found and punished.

Unfortunately, there’s nobody around to properly do the job. In 1943, the battle front is moving from North Africa to the European continent via Italy, and the story opens on one of the nearby islands, Sicily. Forces and resources are scattered and command is splintered. Field hospitals are desperately understaffed.

Into this scenario drives Lieutenant Eddie Harkins, formerly a beat cop in Philadelphia and now part of the military police. His normal duties are low-end, and he’s exhausted and stupid from lack of sleep. Just like most of his peers on the ground.

As the only MP available at the right (wrong?) time, he’s corralled into responding to the murder scene and ultimately into investigating the crime—with no idea what he’s doing. While he may lack technical training for the job, he does have the right instincts, supported by his experience as a stateside street-duty policeman. Perhaps his motivation to stick with the case also has something to do with the woman he knew in the past who happens to be a nurse in this particular hospital. . . .

From that setup, off we go into a police procedural set in a miserable environment where all the rules are supposed to be obeyed, but it’s almost impossible to do so. Unlike many crime stories, where the lines of demarcation between good guys and bad guys are clear, in this novel pretty much everyone has gone off the rails: officers, enlisted men, drafted men, doctors, nurses, the natives, the prisoners. But each character is presented as a plausibly real person with positive and negative attributes suffering from the strains of war.

The only one short on redeeming qualities is the murderer, whose point of view we get along with others in addition to Lieutenant Harkins. That might be the story’s only weak aspect—the head-hopping isn’t well delineated all the way through. That aside, even the killer is understandable in his desperation. The rest are sympathetic no matter what their roles, if readers can put themselves in the characters’ shoes.

This may be challenging for younger readers. World War II is now several generations in the past, and those of us who are the beneficiaries of the Allied victory can’t know what horrific hardships the participants went through. Only combat veterans, in any war, have a clue.

The rest of us have seen films and read books and articles that mainly show the heroic, political, or technical sides of the global conflict, and perhaps gained an idea of what field hospitals are like from watching the TV show M.A.S.H.

In truth, working right behind the front in terrible conditions with inadequate supplies and nightmare injuries will do a number on most people’s heads. That Lieutenant Harkins can get to the bottom of the murder despite his own semi-insanity—even after he’s removed from the case—is impressive. This story shows the upsides and downsides of the saying “rank has its privileges,” since people who outrank Harkins jerk him around.

What gives the story credulity is the author’s experience. Although not a battle veteran, he’s a serious student of warfare and leadership, and has previously written nonfiction about both (and the failure thereof).

Blame the Dead is clearly guided by his knowledge and explorations. This book is slated as the start of a new series and holds great promise to be a good one.