Blades of Freedom (Nathan Hale’s Hazardous Tales #10): A Tale of Haiti, Napoleon, and the Louisiana Purchase 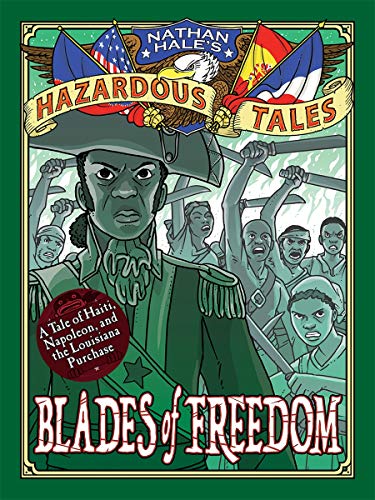 “Should inspire readers to explore more of these amazing-but-true stories and connections.”

What does the largest and most successful slave uprising have in common with Napoleon Bonaparte in France and the Louisiana Purchase in early American history? Nathan Hale pulls all the threads of this convoluted history into a compelling tapestry that links enslaved Blacks fighting for their freedom in the Caribbean to the rise of Napoleon after the French Revolution, when peasants fought for their own freedom against the oppressive elites, to President Thomas Jefferson’s purchase of a large swath of territory in North America claimed by the French. This is the kind of history that will excite young readers and show them how disparate events, far from each other in time and space, can have major impacts on each other.

It’s a complicated story and some elements are dispatched so quickly they leave the reader with questions. The French territory of Louisiana is given to the Spanish in the Treaty of Fontainebleau in 1762 (later returned in 1803 as part of the settlement after the French-Spanish war of the Pyrenees). This event is a single page described as King Louis XV of France saying to his cousin, King Charles III of Spain, “I’m giving you a little present . . . the entire Louisiana territory!” The background for the “gift” is considered unimportant and distracting, so curious readers will need to look for answers themselves, but it’s a strange lack in a book that thoroughly builds up Napoleon’s military career and the brutal history of slavery in Saint-Domingue  (later the Black-governed country of Haiti).

Another lack is the aftermath of the French Revolution. We’re told that “the starving people of France revolted against the nobility, cut everyone’s heads off, and started a new government.” That the French king and his family were also killed isn’t mentioned. Nor is the new leadership described except to tell us later that Napoleon gets a role as “first consul.” His stature as “emperor” doesn’t even get a sentence at the end of the book when the main characters’ later fates are described.

But these are small nits in a rich and fascinating history of how the hunger of the Black population for freedom, their determination to fight for it, the leaders who rose up among the many, succeeded in a fight many Europeans thought couldn’t be won. Napoleon, with his advanced weaponry, lost 60,000 French soldiers fighting the rebels of Saint-Dominge. Altogether, through the many years of fighting, 350,000 people died in the struggle.

It was this massive loss that made Napoleon desperate for money, so desperate he was willing to sell an enormous stretch of land in North America to the young United States. Before the defeat, Napoleon’s plans had been to use the riches from the sugar plantations in Saint-Dominge to fund his forces in New Orleans. From there, he could conquer all the land east of his control, that is, the much weaker United States. With the surprise loss of the island colony, Napoleon chooses instead to focus on Europe, first getting much needed capital by getting rid of the now-useless land to President Jefferson.

So we Americans have Haiti to thank for the central part of our country. And that is one of the incredible things history teaches us: that unintentional effects can be startling and long-ranging. This kind of book should inspire readers to explore more of these amazing-but-true stories and connections. Fortunately, Nathan Hale has a whole series of these books, feeding the curiosity his clever writing inspires.