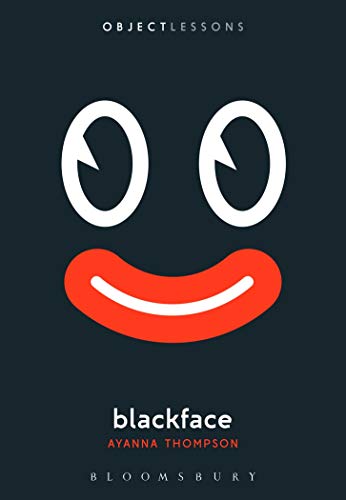 This powerful little book belongs to the Object Lessons series described by one admirer in the flyleaf as “the most consistently interesting non-fiction book series in America” (Megan Volpert, Pop Matters). Typically these books, which fit nicely into a small pocket at around 25,000 words, focus on a specific, often prosaic object, upon which the author can ruminate to his or her content— though always bearing in mind space limitations—with often surprising and profound results.

Ayanna Thompson has chosen the concept and practice of blackface for her wide-ranging and hard-hitting meditations. The launching pad was her surprise and horror that in the third grade at her son’s private school, many of the white children presenting research projects on their heroes and heroines—Martin Luther King Jr., Serena Williams, Arthur Ashe—were “in full-on blackface make-up.”

Beginning with several contemporary examples she shows how blackface is defended by white people as an act of celebration and love, or imitation and verisimilitude, through “the inherent white supremacist logic of white innocence.” Among those singled out as perpetrators of this logic are two decades ago Megyn Kelly and Justin Trudeau; and more recently fashion designers Gucci and Moncler, with many eminent practitioners in between. She declares that there is “a filthy and vile thread” linking the first performances of blackness on an English stage, with the killing of George Floyd in 2020.

Thompson traces the application of Black makeup by white people from the medieval Mystery Play cycles of York, Coventry, and Chester, UK, where blackness indicated devils, fallen angels, or the souls of the damned; through Shakespearean drama (featuring two modes: “exhibition black” and “racial prosthetics black”); the once very popular black and white minstrel shows aired inter alia on the BBC; to eminent white actors, including Sir Laurence Olivier, blacking up to play Othello. “Olivier’s costumes get smaller and smaller as the film progresses exposing more and more of his painted body and inviting the viewer to wonder how far up the makeup goes. All. The. Way.”

As she shows there are gradations of horror expressed toward different performances; blackface minstrelsy is now regarded as “beyond the pale (pardon the pun)”; whereas there has been more hesitancy to condemn the great and the good for succumbing to this mode and attracting a lot of publicity and funds.

In an interesting chapter she reflects by contrast on the very uneven success of Black actors taking on white parts with the application of whiteface that involved. As she notes “White actors in blackface = congruous. Black actors in whiteface = incongruous.”

Thompson states somewhere midway, “The politics of performance are less relevant to me, than the sustained performance tradition. By all appearances white people simply love to play black, and they can’t give it up even when they know it’s wrong.”

But the politics and the individual performances are surely inextricable. Unequal power relations (actual or perceived), permit and support the blackface transgressions. Sir Laurence Olivier . . . rich, white, heterosexual, male can “play at” being Black, and return untarnished to his position at the top of the evolutionary tree! The equations are different for Black actors who take on whiteface.

Perhaps the Object Lessons mode militates against this approach, but in fact Thompson’s witty and pointed analysis would have benefited if she had stressed a little more the political, social, and financial issues that sustain blackface manifestations, as an epi-phenomenon of historical racial inequality.

She aptly illustrates that Olivier had an unseemly, even lascivious, enjoyment in applying his black face and body make-up. And there were surely eminent Black actors who could have played Othello. But Olivier was also massively sustained by commercial and reputational forces at least in the UK. Whereas, in the US the political atmosphere had changed and moved on, giving rise to critical horror at Olivier’s performance.

It would have been interesting to comment further (space permitting of course!) on the intersections of race and gender power relations. Are women less likely to don blackface? It seems so from the material presented here. bell hooks’ commentary on the propensity of Black male comedians to cross-dress as overweight Black females quoted briefly, is another good illustration of compound, unequal power relations.

In general men (Black or white) acting as women are old, fat, unwanted, and ridiculous—the pantomime “Widow Twanky”); while when women act as men (Marlene Dietrich in top hat and tails, or the traditional pantomime Prince Charming, almost always played by a beauty queen) they are definitively if briefly improving their status and attractiveness.

It’s well-known that in any society trans women face more difficulties in being accepted than trans men. And in terms of media, famous actor Scarlett Johansson was surprised at the outcry from trans actors when she prepared to play a trans male part; hadn’t she after all already been Japanese?

Thompson ends on a cautiously optimistic note, that since George Floyd’s killing  there is a broader audience wishing to engage in informed dialogues about race, and that this would include, for example, teachers and parents at her children’s schools. She acknowledges her debt to numerous other publications on blackface minstrelsy, and hopes that her book will be the last one on blackface that is needed!

Blackface is a passionate, well-informed, and gripping read, though in places tighter editing would have strengthened her complex and compressed arguments. Overall, another triumph for Object Lessons.