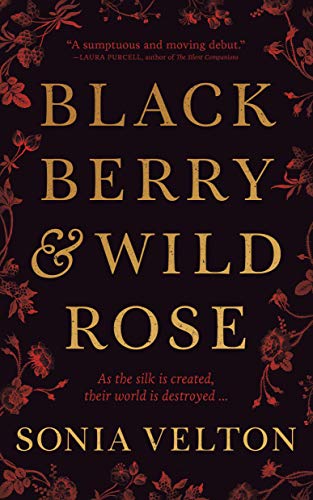 Sara Kemp arrives in the Spitalfields section of London in 1768 with nothing but a few pounds and a letter of introduction to work for a family as maid. Upon arrival, confused, inexperienced, and weary, she is approached by an elderly woman who offers her shelter for the quickly approaching night.

Sara accepts and soon finds herself a prisoner. The woman has taken her money and letter of introduction and plunges Sara into the world of prostitution, and Sara has no choice but to sell herself in order to survive. With no place to turn, months go by and Sara settles into her new existence. After an encounter with a brutal customer and a public beating by her employer, Sara realizes she must find a way out.

Esther Thorel is as trapped as Sara. An English woman married to a Huguenot silk weaver, she is neglected and lonely. Artistic and creative, she had hoped to work side by side with her husband creating beautiful silk patterns and designs. But after her husband humiliates and belittles her, she gives up her dream and turns instead to the good works of her church. As she delivers bibles to a poorer neighborhood, a chance encounter with Sara Kemp brings these two women’s lives on a collision course.

Sara is hired as “lady’s maid,” and an uneasy relationship between these women begins. While Sara helps Esther dress each day, she cannot help but resent the hypocrisy in this so-called “pious” household. Sara notes as she helps Esther dress that “the vials of paints, cream and patches she owned could have come straight from a harlot’s toilette.” Sara dismisses her mistress as spoiled and naïve.

But Esther is more than she appears. Unhappy in her marriage, she has a past with secrets of her own. She believes Sara should be grateful at the offer to work in a respectable household, but Sara chafes at her servitude while acknowledging its advantages. Sara understands that, “It is an enviable transition from whore to lady’s maid, but both are a life of forced intimacy serving the needs of others.”

Both women struggle with their lack of freedom. Sara, a servant, is at the mercy of her master, Esther’s husband, Elias. But, in a real way, Esther, who describes her existence as in a “gilded cage” is as well. Esther forges a connection with the journeyman weaver who spends each day in the attic, spinning his masterpiece.  As their friendship grows, Esther finds joy in learning to create silk, a pleasure forbidden by her husband. Sara, unhappy in her work, finds pleasure in the company of John Barnstaple, a volatile weaver employed by Elias Thorel.

As orders for silk decline so do wages for the weavers, and soon Esther and Sara are swept up in the midst of conflict, not only between husband and wife, but between master and employee. When the weavers in Spitalfields, London, begin to riot, Sara and Esther are caught in the middle and must rely on each other and their tenuous trust to survive. And through this crisis, both women will realize that they are stronger than they were ever allowed to believe.

Blackberry and Wild Rose is an interesting exploration of the world of the Huguenot silk weavers in London. Velnot does a good job illustrating the mistrust between employer and employee, Huguenot and English, and even husband and wife. While neither protagonist is perfect, they are both authentic and vulnerable. At a time when women’s choices and freedoms were severely limited, Sara and Esther are able to come to an understanding of each other and find the courage to live their lives on their own terms.

Told in two distinct first person voices, it is a glimpse into the world of the Spitalfields silk trade at a time when the working class was hard-pressed and a piece of silk was worth more than a man’s life. In Blackberry and Wild Rose, author Sonia Velton weaves a tale of secrets and yearning into a bittersweet but satisfying end.