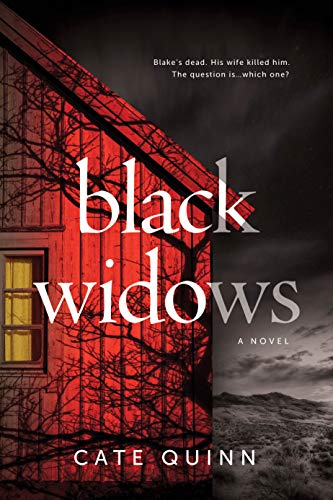 Author Cate Quinn moves the domestic suspense genre up a notch with her rock-solid suspense novel, Black Widows, when she introduces three women who have nothing in common except a husband. The same husband.

Blake Nelson broke away from the modern day Church of Latter Day Saints when he decided to form a polygamous marriage and move to a secluded off the grid rundown ranch in the middle of the desert with a lifeguard tower as a lookout post in preparation for end of days. A super sized canning machine was set up to provide home-canned food stuffs in large quantities. Once a month shopping trips to a wholesale store on the highway would supply other goods.

Why would women, three of them, agree to enter this unconventional arrangement? Because it was a better life than the one they left, and they tell their stories in alternating chapters.

Rachel, First Wife—A picture perfect sister wife if there ever was one. College educated, religious, devoted, loyal, and she can cook. Growing up in a cult, she had suffered every manner of abuse. She fell in love with Blake at Brigham Young University. As first wife, she is seen by the other two as head of the Nelson household. She does the canning in a shed out back.

Emily, Sister Wife—Young, innocent, far from worldly, had never even laid eyes on a desert or a marriage bed, but was anxious to leave her drab, stark life with a cold, unloving mother. She didn't know what she was getting into when she came home from her honeymoon with Blake, but put herself in a frame of mind that made the arrangement work for her. Her marriage to Blake had Rachel's approval. At first. Then jealousy began to fester.

Tina, Sister Wife—Tough talking and fresh from turning tricks in Las Vegas with 40 arrests under her belt, she couldn't have been more different than the other two. The promise of peace and quiet in the desert, love and affection from Blake, and the companionship of two sister wives were what appealed to her. Her addition to the domicile was what not what the other two expected.

What could possibly go wrong?

The story begins when Blake is found not just murdered, but dismembered—three fingers including the wedding ring are gone as well as other body parts—and the widows are questioned by the police one at a time. The ebb and flow of love and hate in the household is told from the point of view of each sister wife, and their stories don't always match up. Their answers to questions about the night of the murder don't match up, either, and beyond that, each widow has a murky secret they dare not reveal even to each other.

While waiting for the autopsy report, they are held in custody in a safe house. During their first night alone, the widows compare notes, putting together what they each know about Blake and what they had learned about him from the police. They wonder if Blake had secretly gone shopping for a fourth wife.

Blake's mother Adelaide, who doesn't like any of them, thinks Rachel killed Blake. When the police find evidence to support that, Rachel is arrested at the funeral, and Adelaide gloats.

"As I'm led handcuffed from the church I see Mrs. Nelson standing at the front, watching me, a victorious look on her face."

Soon the police turn up evidence that points to Tina as the killer and she's arrested, too.

But then Emily confesses and the other two freak out:

"Because Emily knows. She knows. What's more, she won't be able to help herself. Sooner or later they're going to get it out of her. Emily's gonna tell the police everything."

So who killed Blake? And why?

The author includes little known information about the religious views of this outlier family, and hints at how the bedroom arrangements are managed. Her adept handling of the clues—and they are there—give nothing away until the shocking end.