Black & White Photography: The Timeless Art of Monochrome in the Post-Digital Age 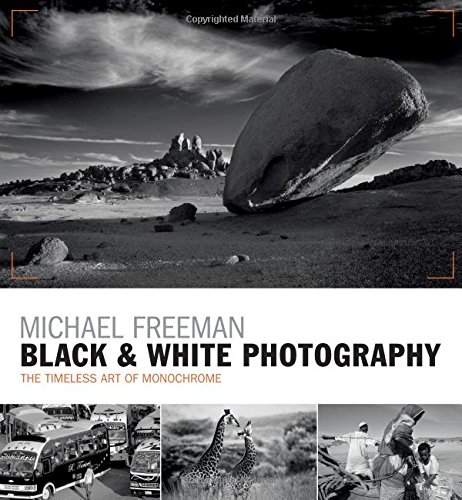 “Freeman's emphasis is on maximizing creative choice while utilizing all the knowledge acquired in using traditional methods.”

There is one word to describe this book: WOW! Michael Freeman’s Black & White Photography: The Timeless Art of Monochrome in the Post-Digital Age is a treasure trove of information, a gold mine for students still in the process of learning photography as well as being extremely useful to advanced enthusiasts intent on furthering their knowledge and skills.

Beautifully presented with outstanding reproduction and layout, the book is replete with images illustrating the various aspects of Freeman’s explanations for color and black and white, as well as the many screenshots showing software adjustments in post-processing. It is all clearly communicated.

He also does an excellent job of referencing several outstanding images of the past, analyzing what made them work so well as black and white, and reworking color photographs and creating corresponding conversions as monochrome images, while evaluating what makes for an effective monochrome photograph.

In referencing master printer Ansel Adams and his darkroom techniques, Freeman acknowledges that the overwhelming intent of Adams was to “be able to do it [the image] justice,” and how those darkroom methods translate into today’s digital post-processing context.

The original premise of perception regarding photography was that of a monochrome image. And although a handful of people experimented with color photography, black and white was the norm until the widespread use of a commercially viable color film, (modern) Kodachrome, which was perfected in 1935 by Godowsky and Mannes. But by the 1960s and 70s “the whole ethos of pure-and-essential black-and-white photography, versus crass-and-commonplace color shooting began to crystalize. . . .”

The accepted standards that prejudiced photography up until the late-1990s was that black and white was the acceptable method for photographic fine art and museums, but color was somehow inferior. However, digital photography has created an entirely new playing field by broadening the alternatives for photographers.

Freeman states, “black & white . . . began as a necessity, became accepted as normal, and now, with the full choice of color . . . coupled to the infinite processing possibilities of digital images, it is a creative choice.” His emphasis is on maximizing that creative choice while utilizing all the knowledge acquired in using traditional methods, such as dodge-and-burn or manipulating gamma via the Zone System.

There is an illuminating (no pun intended) clarity to the way that Freeman explains in plain language the origins of photography, its history, the basics of color photography, the photo-chemical process, digital technologies, and how a contemporary imaging sensor works. He provides many illustrations and describes the technology by providing examples of red-green-blue (RGB) separated photographs in color channels, color filter arrays, black and white tonal selection by filtration, as well as defining the basic attributes of a monochrome image with substance, i.e. shape, structure, tonal nuance, form, volume, texture, etc.

One of the pleasures of the book is the selection of very high-quality photographs that are used as tutorial examples, most of which were taken by Freeman who happens to be a world-class photographer. The book’s tonal reproduction of photographs on medium weight paper is outstanding. Ilex, the publisher, has invested much care and time into all aspects of the layout, printing, and softcover binding to make this book truly special. It functions as gallery, reference, and text book in its instruction of complex topics and methods. This book is remarkable and definitely a keeper.