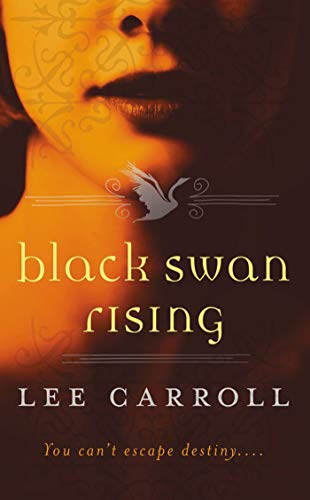 Mild-mannered Garet James, a New York jewelry designer and (though she always denies it) artist, has plenty to worry about. Her commissions are down because of the weak economy; her art dealer father is in the hospital, wounded in a robbery attempt (one he may have arranged himself to commit insurance fraud); and they could lose their home.

As an eerie mist clings to the city streets, Garet accepts a curious commission from a mysterious antiques dealer named John Dee: to break the metal seal on an old silver box bearing the same black swan seal as Garet’s old family signet ring. Opening it, however, releases something unsettling and otherworldly, drawing Garet into a complicated world of tangled magical alliances and deadly evil.

John Dee is the infamous medieval alchemist who, Faust-like, consorted with demons centuries ago in return for power. But Garet herself is the descendant of a long line of “watchtowers,” women who possessed the ability to close—or open—magical gates and protect the world from invading evil. Garet may be the key to saving the universe from the forces she accidentally unleashed—but first she’ll have to learn how to use her talents. In the meantime, she’s a target for the worst of Dee’s forces.

Fortunately Garet’s got some help. Turns out her father’s kindly nurse Obie is the great king of the fairies himself, Oberon, and Puck works in a local bakery. Meanwhile a sneaky but sexy vampire/hedge fund manager named Will Hughes could be more of a threat than help. Garet isn’t entirely sure whom she can trust. Everyone seems to have a hidden agenda. But not acting at all will only bring about disaster for everyone.

“Lee Carroll” is the pseudonym of a wife-and-husband writing team made up of Hammett Award-winning mystery writer Carol Goodman and spouse Lee Slonimsky, a poet and hedge fund manager. Their writing is smooth and skillful, the characters are memorable, and the quirky setting builds a warm homage to New York City.

Although the fantasy elements are a mish-mash from various cultures that don’t quite fit together, Black Swan Rising offers enough chills and clever twists to entertain both genre fans and mainstream readers willing to dip their toes into urban fantasy.