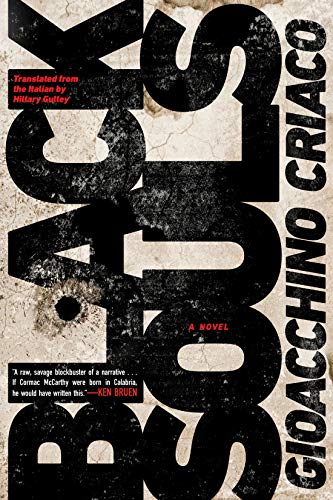 “Across the decades of the narrator’s life, Black Souls becomes as mysterious as a set of cave paintings or yesterday’s ‘tags’ on a building.”

Nordic noir, French crime fiction, Japanese, South African—none of those are as surprising as the new crime novel from Calabria, Italy, Black Souls by Gioacchino Criaco. Deep and slow, it ranges over the youth, coming of age, and violent criminality of a nearly nameless narrator. His love for the landscape and the men in his family is a warm and restless ocean in which the crimes of the book roll, surge, and multiply. From early kidnappings and killings that balance the powers around the farming family, they ease toward urban connections and at last the cream of the crime crop, the drug trade.

But in Criaco’s hands, this becomes a literary exploration of a timeless land where fathers and sons form the ultimate bonds of the community. Calabria is one of the “oldest” occupied parts of Italy (today the label is for the “toe” of the nation’s “boot” shape), with some 700,000 years of human presence. Once redolent with many languages and histories, it has become both more Italian and more intensely occupied by the ’Ndrangheta, a family-based crime network now darker and larger than the mafia.

Criaco binds this criminal nature to the natural landscape and the eons of myths that permeate the consciousness of the peoples there. When the novel’s narrator slaughters a wild bull, he spends a harrowing night in and out of sleep:

“I thought I could hear a mournful bellowing. I saw the bull’s head staring at me with that terrible, artificial eye in the middle of his forehead. . . . An immense pain overtook me, I was aware that I was trapped in a nightmare, I tried to wake up and couldn’t, I got up and fell back down, and only when the pain had traveled to my core could I shake myself awake.

“I found myself sitting up in the dark. Bino tenderly pressed a cup of hot coffee into my hands. ‘Did you hear them? . . . We are a part of the mountains, not their masters. Sometimes practicing evil is necessary to survive. Taking a life is always wrong. But if you don’t give your conscience an alibi or a decoy, it will scream at you every night. Come, we have to appease them.”

This mythic connection to centuries of choregraphed murder and revenge echoes through the book. “Black souls” are not cleansed, but held in balance, and evil is negotiated. Some innocence is allowed to remain, protected, and begins to represent the reason to struggle to reach that balance in each new round of crime and punishment.

Across the decades of the narrator’s life, Black Souls becomes as mysterious as a set of cave paintings or yesterday’s “tags” on a building: The connections among people matter here more than anything else, even more than avoiding evil itself.

There are few comparable crime novels today. Stuart Neville’s haunted fiction set in the Troubles of Ireland may come close; so, however, does Dostoevsky with One Day in the Life of Ivan Denisovich. Make room for this book in the form of the “precious gift” that this criminal’s success is finally able to give to his father: “That money, even if it came late, too late for me, restored my father’s dignity.”