Black Snow: Curtis LeMay, the Firebombing of Tokyo, and the Road to the Atomic Bomb 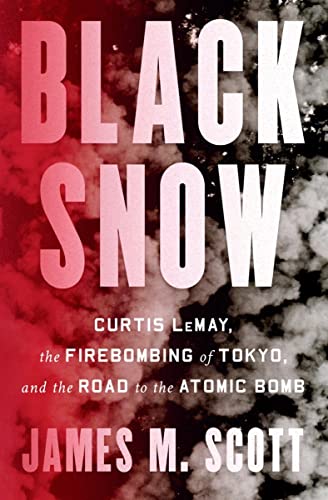 “Historian James Scott’s new book about the firebombing of Tokyo and other Japanese cities in the spring and summer of 1945 restores LeMay to his rightful place in the pantheon of great American commanders of the war.”

War is very simple, U.S. Air Force General Curtis LeMay once remarked, “You’ve got to kill people, and when you kill enough of them, they stop fighting.” At the end of World War II, LeMay was lauded for his area bombing strategy that contributed to Japan’s surrender by Air Chief of Staff Henry “Hap” Arnold, General Haywood Hansell whom LeMay had replaced in the Pacific, and many others.

LeMay’s star continued to rise after the war. He headed the Strategic Air Command for nearly a decade, and later served on the Joint Chiefs of Staff during the Cuban Missile Crisis and the early years of the Vietnam War. But his public star faded after remarks he made about bombing North Vietnam “back to the Stone Age” and when he served as George Wallace’s running mate in the 1968 presidential election.

LeMay, of course, did not invent the concept of strategic area bombing—the great Italian air power theorist Giulio Douhet did in his book Command of the Air (1921)—but, as Scott notes, LeMay’s “firebombing campaign was the ultimate realization of Douhet’s vision.”

Scott traces the courage, steadfastness, and strong work ethic of LeMay to his “hardscrabble childhood in Ohio,” where LeMay’s father switched jobs often and his mother worked as a cleaning woman to help feed her six children. LeMay delivered newspapers, Western Union telegrams, and department store items to help the family financially. In high school, LeMay got a job as an ironworker. He then put himself through college at Ohio State, where he studied civil engineering and joined the ROTC, while working at a company that made railroad car chassis.

LeMay joined the Ohio National Guard in 1928 and learned to fly airplanes. After graduating from flight school in 1929, LeMay joined the Army Air Corps as a second lieutenant. Scott describes LeMay at this time as “a fighter, always one to stick it out regardless of the obstacles.” It was a trait that would serve him well during World War II.

LeMay flew B-17s before the war and was known as “the best damned navigator in the Army Air Corps.” After Pearl Harbor, LeMay was named commander of the 305th Bombardment Group headquartered in Salt Lake City. LeMay drove his men hard, but they considered him “fair, but tough as nails.”

He was sent to England where he flew bombing missions over Germany, pioneering bomber formations that maximized performance. He devised new tactics that were adopted by the entire Eighth Air Force, causing one colleague to remark, “If there ever was a man in the right place, at the right time, it was Colonel LeMay.” That same colleague also said of LeMay: “Failure was not in his vocabulary.”

LeMay’s approach to war was practical and unsentimental. “We aren’t fighting a Hollywood war here,” he once told his men. “Leave the glory, the false heroics, and the sentimentality to the actors and the sob sisters.” General Jimmy Doolittle called LeMay “unusually gifted as an airman and as a combat leader.” LeMay’s talent and leadership earned him a promotion to brigadier general in September 1943. He was only 38 years old.

Scott notes that after brief service in the China-India-Burma theater, LeMay was chosen to lead 21st Bomber Command that was headquartered in Guam and flew the relatively new B-29s, the “superfortresses” that were designed to bring Japan to its knees.

LeMay replaced Gen. Hansell, one of the original members of the so-called “Bomber Mafia” that promoted precision daylight bombing of military targets as opposed to area bombing civilian population centers. That effort to make war less cruel by limiting civilian casualties, however, didn’t work—Japan’s war effort was only minimally affected, and daylight bombing proved costly to American airmen. LeMay understood, as General Sherman did during the Civil War, that “war is cruelty, you cannot refine it.”

So LeMay switched to area bombing of Japan’s cities at night. And instead of precision munitions, LeMay’s bombers dropped incendiary devices, including Napalm. The result was devastation on an unprecedented scale. From March–August 1945, LeMay’s bombers destroyed/burned large portions of 66 Japanese cities, inflicting hundreds of thousands of casualties, rendering millions of Japanese homeless, destroying factories, businesses, schools, hospitals, and more.

The most devastating raid was on Tokyo on March 9–10, 1945. Scott tells this story from the perspectives of both U.S. airmen and Japanese civilians. One American airman described watching “block after block go up in flames until the holocaust had spread into a seething, swirling ocean of fire, engulfing the city below for miles in every direction.” Another airman described a “sea of flame, a mass of roaring fire that seemed to cover the city like a boiling cauldron.” Still another pilot called it “the most terrifying sight in the world.”

Tokyo’s residents in the target areas were incinerated, burned, baked, scalded, melted. Their homes were destroyed. One survivor described the fire as “a living thing” that “ran like a creature chasing us.” Concrete buildings became human ovens. Separate fires merged creating firestorms at wind speeds and gusts that reached 70 miles per hour. Tokyo, another survivor recalled, “was a blazing hell lit by the swirling and rolling flames.” “It was as if,” another survivor remarked, “the world had ended.”

The firebombing of Tokyo killed an estimated 105,000 people. It destroyed nearly 16 square miles (more than 10,000 acres) of the city. More than 267,000 homes were destroyed. More than a million residents were left homeless. Military and industrial targets were also destroyed. And yet, Japan’s leaders wouldn’t surrender. So LeMay’s bombers struck Nagoya, Osaka, Kobe, and dozens of other cities. And still Japan’s leaders refused to surrender. It took two atomic bombs and the Soviets joining the war against Japan to finally force its leaders to surrender.

Scott to his credit does not succumb to the increasingly fashionable moral equivalence approach to the Pacific War. He notes that Japan not only started the war but it had carved a path of destruction and atrocities in China, the Philippines, and other places that cost many times more lives than the American bombing campaign. And he further notes that America’s air war over Japan likely saved both American and Japanese lives that would have been lost had American forces had to invade Japan’s main islands.

To paraphrase the Bible: Japan sowed the wind in evil and reaped the whirlwind in disaster.