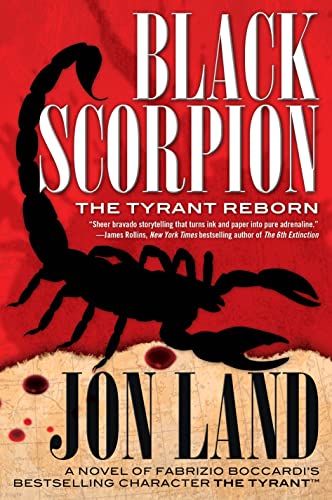 “Paging through Black Scorpion, readers may get the sense that they are witnessing a new literary phenomenon emerge.”

There are heroes and there are antiheroes, and then there is Michael Tiranno—the Tyrant—who stands in a class all his own. He is somewhere between Bond and Batman, yet infinitely more believable than both. Paging through Black Scorpion, readers may get the sense that they are witnessing a new literary phenomenon emerge.

Black Scorpion is the Tyrant’s second adventure penned by bestselling thriller writer Jon Land, a long-awaited follow-up to The Seven Sins (Forge, 2008). This time, Land pits Michael Tiranno, an orphan who clawed his way out of darkness to become a wealthy Las Vegas tycoon, against a global human trafficking syndicate and its twisted leader, Vladimir Dracu.

Black Scorpion has everything that thriller readers love: paramilitary battles, exotic settings, ancient secrets, and a twisting plot that ties it all together.

Michael Tiranno does not wish to be a hero. His one and only desire is to build an epic casino that will offer the world an escape from reality. But Tiranno cannot escape his own reality. His past threatens to drag him back into pain and darkness. His love is kidnapped while away on an archeological dig, a freak accident threatens to destroy his life’s work, and somewhere in the shadows, a dark force is orchestrating all of it. Tiranno must become the Tyrant, taking the offensive, heading toward an inevitable clash with a cruel sociopath who will open Tiranno’s eyes to his own mysterious origins as well as the future that fate has prepared for him.

Once in a while a great concept merges with a superb writer to form something special, a whole greater than the sum of its parts. Black Scorpion represents one of those occasions, with an original antihero, a tragic villain, and a primary setting that leaps off the page.

Michael Tiranno, the Tyrant, is a unique antihero conceived by the real-life business tycoon Fabrizio Boccardi. Jon Land brought the Tyrant to life in The Seven Sins. Now, in Black Scorpion, he really gives the character form and depth. Demonstrating his usual insight in to human nature, Mr. Land leads Tiranno from a state of arrogant denial about the subtle, divine force that aids him, all the way to reckless abuse of its power—a sin for which he is bound to suffer when finally facing his nemesis, Vladimir Dracu.

To reveal an epic hero, a story needs an epic villain whose path parallels his own. Vladimir Dracu could easily be used for a character study in a Gothic literature class. Land takes the classic vampire persona and weaves its mythical elements into Dracu in the form of believable human traits, creating a modern-day tragic villain that is more terrifying than the original, simply because he could truly exist. The resulting character serves as a dark reflection of the Tyrant, without which the hero could not have been fully realized.

Likewise, the character of the Tyrant could not have been fully realized without the Seven Sins casino resort. Luxurious settings are a mainstay of the thriller genre, but with its grandiose rooms, separated by a few inches of glass from a variety of deadly creatures, the Seven Sins is more than just a backdrop. It is its own character, representing the two halves of Tiranno himself—the dreamer and the killer.

The Tyrant is a great concept, and Jon Land skillfully explores the character amid a heart-pounding adventure that will keep readers turning the pages, effectively bridging the gap between the gritty traditional thriller protagonist and the larger-than-life comic book superhero.

Thriller readers who are looking for something new and exciting will definitely find it in the Black Scorpion.