The Black Prince of Florence: The Spectacular Life and Treacherous World of Alessandro de' Medici 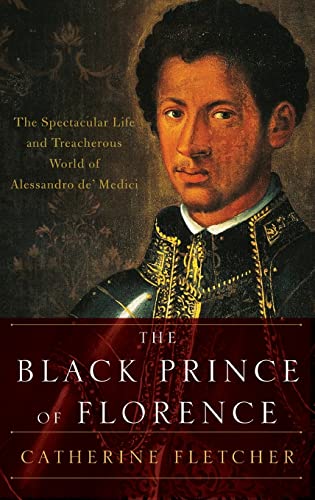 Pioneer CIA director and espionage historian Allen Dulles famously wrote that more spy craft commonly went on in any Italian city state in the Renaissance than in the whole of the relatively modern American Civil War. Intrigue has an ancient history that makes anything in our modern world by comparison seem mundane and impersonal. No movie, play, or television program can capture that world like a good book, fiction or nonfiction.

Catherine Fletcher in The Black Prince of Florence: The Spectacular World of Alexandro de' Medici proves that point. Her history of the first of the great leaders of the most powerful family in the Medieval Italian City states (actually more like family businesses built on power) pours out intrigue, as well as "terror, murder, and bloodshed" to which her subject's story added "slavery and the seeds of racism" to the mix.

The book includes (mercifully) charts, a glossary of names, a timeline, maps, and a note on money in Renaissance Italy. The subject and times are that complicated. Even the controversial issue of the skin color, ethnicity, and race of Alessandro de' Medici requires detailed explanations of what Moor, mulatto, slavery, etc. meant in those times.

The story of Alessandro, the author admits, "is still very far from [that of] a well-known historical figure" but "there is good reason to rediscover it." As Fletcher points out, his importance is demonstrated by the fact that so much survives on him and "it would not be a bad thing to hang his portrait a little more prominently on Florence's gallery walls."

De' Medici historian Benedetto Varchi, for example, wrote "the tales" of Alessandro's "wickedness, in all its bloody glory." This Duke was called a monster, murderer, and tyrant, cruel and savage. He was himself murdered in 1537, while lured into a tryst with a married woman by his cousin, pimp, successor, and killer, one of the other but not so magnificent Lorenzo de' Medicis.

That death opens the book. The succeeding chapters take the reader full circle back to that same point within the world of the Italian city states that founded today's capitalism, era of invention, Industrial Age, politics, science, and so much else. That era was also one of incredible murders, plagues, politics, and wars that also gave us the very language of our modern world.

Family, money, the Roman Church, and sex were avenues to power. As Fletcher writes, the exotic zoo, like everything about the corrupt and lavish Pope Leo X (one of the Medici popes) maintained on the Vatican grounds, was a metaphor for rule in Italy in the 1500s. It was the age from which came Niccolò Machiavelli's political classic The Prince.

The de’ Medici had such unquenchable avarice for power and wealth that it outstripped its supply of family members to fill positions. Two powerful Medici Popes made Alessandro’s rise possible, including his being made the family’s only duke (at age 12) and the husband of the illegitimate daughter of the Holy Roman Emperor.

As the first permanent Medici ruler of Florence, he likely gave as often as he received assassination attempts, including one plot to kill him by his brother Cardinal Ippolito de' Medici. Rumors credited Alessandro with poisoning his mother and also his brother.

The Black Prince is a dark and murderous tale that is exceptionally well-told. It leaves the reader rushing from page to page wanting more. As said in Hollywood about the best of nonfiction, "you cannot make this stuff up." Fortunately, as the book so well illustrates, we do not inherit from the Renaissance that same high level of common place homicidal intrigue.