The Black Jersey: A Novel 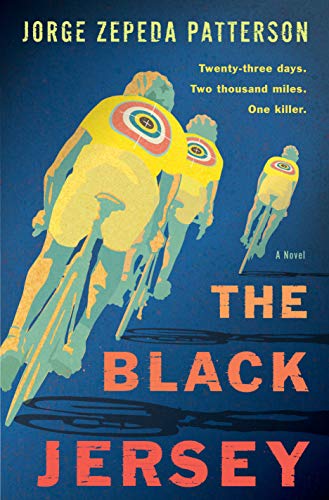 “This ability to satisfy multiple audiences while presenting something fresh makes The Black Jersey a definite winner.”

The three-week-long Tour de France cycling race offers enough drama on its own to not need a murder mystery to make it exciting. But add in some dastardly crimes and you get a winner of a novel that’s all about winning—and the cost of losing.

Even though The Black Jersey is a big book loaded with action, it doesn’t start with action. Rather, it smoothly introduces the unusual main character through his unusual backstory, giving us the foundation needed to understand the world of professional cycling. It also engages us in the psychological factors crucial for the sport and thus the story.

Readers unfamiliar with professional cycling, especially the long-distance endurance variety, might be amazed to learn what competitors go through. Just making a team requires ferocious ambition and masochistic training for years. Races require grand-chess-master strategy, none more so than the crown jewel of the circuit, the Tour de France.

Victory is symbolized by the yellow jersey, worn by the race leader, per stage and overall. It’s so important that competitors and their teams will do darn near anything to get it. This opens the door to all sorts of crime possibilities.

The author’s imagination creates a credible series of events to bring murder and mayhem, sabotage and betrayal—especially betrayal—to the event. What’s left to readers’ imaginations is what the black jersey of title has to do with anything. It’s never mentioned in the book; and there’s no quick and easy explanation available online.

Therefore one must assume that the black jersey represents evil—an abundance of which stalks the teams and tries to interfere with the race results and the glory and money that go with them.

All troubles revolve around Marc Moreau, a key player on one of the top teams. It’s his job to help his team leader—the Tour’s reigning champion—win overall for an unbroken streak. That leader happens to be Marc’s best friend, substitute brother, and contender for the heart of the female lead. These elements build conflict into their relationship on many levels, exacerbated by the fact Marc is a stronger cyclist.

Not only must Marc struggle to suppress his own ambition against the value of his job and lifelong friendship, but also he must turn spy when the French police ask him to work within the Tour to identify the party(ies) interfering with the race and jeopardizing lives. Marc was once a military policeman, which gives him the skills to recognize and thwart the evildoers.

In several ways, as other reviewers have noted, Marc and the story set in bicycle racing resemble Dick Francis’s heroes in their tales about horse racing. Marc is smart, inventive, brave yet vulnerable, and able to withstand intense physical battering (and give back when due). He knows his sport intimately and educates us about it in a fascinating way, while he’s compelled by honor and danger into new and dangerous territory.

Chances are good that Francis fans will enjoy this novel to the same degree. So will adventure and mystery fans of many stripes. Cycling fans, of course, will appreciate it best because they’ll understand the nuances and know some of the hardships personally. And anyone who just likes a good story with solid characters and intense human drama will enjoy it, too.

This ability to satisfy multiple audiences while presenting something fresh makes The Black Jersey a definite winner.