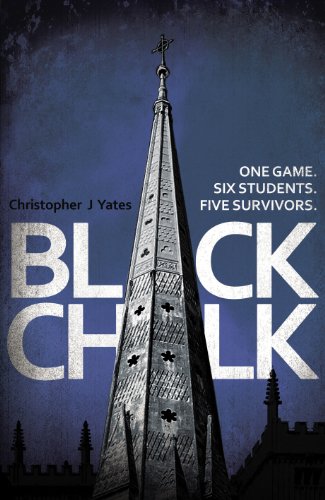 “This book may put you off your game—if you aren’t careful.”

“For almost a week they had only a vague idea of how the Game would be played, just a few principles. A large financial reward for the winner. Numerous consequences for losing - like teenage dares—at first just embarrassing, later on mortifying. Sizeable deposits to ensure the performance of consequences. A gradual escalation. And the dares had always to remain purely psychological, nothing physically dangerous. A game of the mind.”

Everyone plays games—board games, online games, food games, trivia games. But most people do not play a game like that found in Black Chalk. This game has consequences, real consequences. The kind that can get a person killed . . . or worse.

Black Chalk is a psychological thriller with more twists and turns than a modern roller coaster. It is confusing and frustrating, and in spite of that the pages keep turning.

Six people meet during Freshers’ Week at Oxford University. These are ordinary people with peculiar habits and awkward backgrounds. The brains behind the Game are Chad and Jolyon, an American and a Brit who meet during their first week at Oxford. Gradually, and with great care, they expand their circle. They need six to play the Game.

Things start at the Freshers’ Fair. The Fair allows new students to discover extracurricular activities. The mundane: tiddlywinks and knitters; the cerebral: chess and physics; and the trivial, such as the Sock Soc--“. . . a society for the discerning socker.”

What catches Chad’s attention is Game Soc. He approached the booth and the three students standing behind it, “I have a proposition for you.” And those six words change Chad’s life.

At the start, the Game is just that. It’s fun and the consequences are mildly amusing. But as it progresses tempers flare, the consequences become more, well, consequential, and the friendship these six formed begins to unravel.

When they started no one knew how dangerous the Game would become. No one realized the toll it would take on each of them. A simple game of cards and dice devolves into degradation and humiliation.

One of the three representatives from Game Soc is always present for the weekly session. Until one of them, Middle, drops out—but only after revealing a secret, a secret so bizarre as to be unbelievable.

The author never reveals exactly what the game is; how it’s played; or what the rules are. It’s always just the Game. The book takes the reader from the present to 14 years earlier; from New York to that first year at Oxford; from the original six participants to the final two players.

How does the Game end? With the last page of the book? Maybe, or perhaps there is something more to the Game. Something we do not understand. Something we prefer not to understand. The Game continues. Because, after all, there can be only one winner and that means the loser must face that final consequence.

This book may put you off your game—if you aren’t careful.