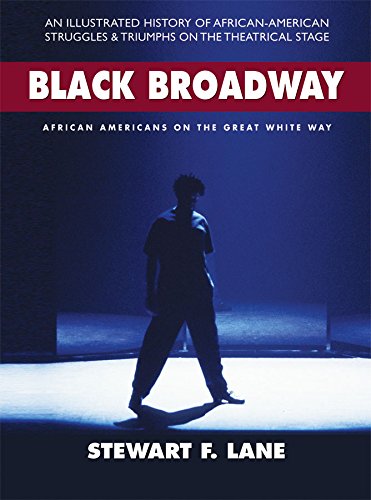 As a follow up to his books on American theater history, Let’s Put on a Show! and Jews on Broadway, Stewart F. Lane—himself a six-time Tony Award winner as producer for La Cage Aux Follies, Will Rogers Follies, and Thoroughly Modern Millie, among others—has written a new volume celebrating theatrical talents that have, for far too long, been relegated to the sidelines.

In Black Broadway: African Americans on the Great White Way, Lane focuses his admirably researched and beautifully illustrated theatrical history both on the specific Broadway shows and on the great theatrical talents that best define the contributions that black performers and authors have made to the American theater.

And an excellent volume it is.

From first chapter to last, Lane’s love for the theater shines through.

In preparing his readers for what is to come, Tony award-winning director Kenny Leon writes in the books foreword:

“This book is a celebration of nearly 200 years of African-American theater history in the United States, illustrating its contributions to American art and culture, including contributions to Broadway, Main Street, and the way in which theater has evolved. It is also a unique tribute to the many African-American actors, directors, playwrights, and other who have contributed to the fabric of the American theater, most of who are pictured in these pages . . .

Lane was born in Providence, Rhode Island, in 1825 and made his way in his youth to the Five Points District of Manhattan, a crime and disease infested slum bordered by the Bowery on the east, Centre Street on the west and Canal Street on the north. The sheer poverty of the inhabitants necessitated a certain loosening of societal norms, making for a grudging celebration of the area’s diversity. Perhaps it would be only here that William Henry Lane, still a young child, was allowed entry into the local Irish saloons, in which he learned both the Irish jig and the Irish reel. Imitating what he saw, he became a noted dancer in Five Points, and his talent was celebrated by white and black audiences alike.

By the 1840s, Lane had transcended the need to imitate. His dancing by then incorporated European and African rhythms into a dance style combining what our author calls “lightning-fast, complex, syncopated rhythms.” As the author quotes, one reviewer, taken somewhat aback at Lane’s style, wrote that the dancer “was able to tie his legs into such knots, and fling them about so recklessly, or make his feet twinkle until you lose sight of them altogether in his energy.”

Lane died abruptly at the age of 27 while performing his dance in London. But his dance was proven so popular that it outlived him and was performed and refined by African American performers Bill “Bojangles” Robinson and John “Bubbles” Sublett and by white dancers from Eleanor Powell to Fred Astaire and Gene Kelly.

The form of dance performance that William Henry Lane created did not retain the name “Juba.” Within a very few years, the name was simplified to “tap dance,” and, while Lane remains relatively an obscure figure in American theater, he is, quite simply, the creator of this all-American dance that was perhaps most brought to its highest prominence in American films, first by Bill Robinson and Shirley Temple tapping up and down a staircase in 1935’s The Little Colonel, and then, in by James Cagney tapping down a very grand one in 1942’s Yankee Doodle Dandy.

What makes Black Broadway so special is that it introduces the reader to so many talented people—as well as so many who, like James Bland, our nation’s first black composer of popular music—blazed the trail for others to follow. Thus, in these pages, as we travel through history from minstrel shows to vaudeville and burlesque to the modern Broadway stage, we meet luminaries like Bert Williams, who began in a comedic duo partnered with George Walker on the Vaudeville stage, to go on to break down racial barriers by becoming a part of the prestigious Ziegfeld Follies and later, by becoming the first black comic to appear in any Hollywood movie.

At the time of Bert Williams’s death, no less than Booker T. Washington wrote, “Bert Williams has done more for the race than I have. He has smiled his way into people’s hearts.”

Make no mistake about it, Black Broadway is as much a political history as it is an artistic one, with its spotlighting specific Broadway productions, from Orson Welles’s “Voodoo Macbeth” to Deep Are Our Roots, a tale of interracial love that was produced during Broadway’s 1945 season, to something that seems much less revolutionary today than it did back in 1967, the smash-hit revival of Hello, Dolly starring Pearl Bailey leading an African-Americans. These, along with so many others presented in the pages of Black Broadway, stand as benchmarks, not only in the history of black American performers, but also of American culture itself.

The list of African American performers, producers, and writers whose work is celebrated in the pages of Black Broadway is long and diverse. And it is a joy to see that, with each succeeding chapter, the list of names of Broadway performers is longer and longer.

Black Broadway is a wonderful book. It’s coffee table proportions allow it to be lushly illustrated with oversized historic photographs and its heft indicates just how much history it contains, how many tales of the men and women who brought their genius to the center of the Broadway stage that the author, Stewart F. Lane, has to offer.