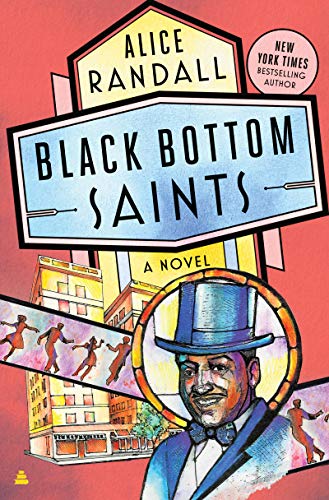 “As a feat of reclamation for the Camelot-like heyday of Black Detroit, Black Bottom Saints, like the legendary impresario at its center, makes plentiful Motown magic.”

Herb Boyd’s sweeping history, Black Detroit (2017), describes the city’s storied Black Bottom neighborhood in its last flash of greatness before the Chrysler Freeway “ripped its heart out” as a “veritable Camelot” whose “cultural ingenuity was always in abundance.”

But no book has ever brought Detroit’s Black Camelot as radiantly to life as Alice Randall’s Black Bottom Saints, though often its illuminations emerge more through prism than lens. In a dazzling trick of literary ventriloquism, Randall adopts the voice of her childhood dance teacher, a titanic (if physically diminutive) fixture of Detroit’s performing arts scene for decades. A legendary emcee, and founder of the Ziggy Johnson School of the Theatre, Johnson produced the annual Youth Colossal revue to showcase youthful dance talent in Detroit. He also spent years writing news columns for Detroit’s pre-eminent Black-owned newspaper, The Michigan Chronicle, that celebrated the leading lights of the city’s Black community.

Ziggy Johnson’s columns presumably provided the raw material for much of Black Bottom Saints, which, in large measure, consists a series of 52 intimate, “Lives of the Catholic Saints”-style portraits of Black Bottom’s best and brightest, as composed by by Ziggy (as he’s known in the book) in his hospital bed in the last days of his life in 1968. It’s Ziggy ’s voice rendered through the prism of Randall’s shimmering and inventive prose that makes Black Bottom Saints so luminous and affecting, and such a powerful evocation of the community’s golden age, when independent Black institutions cultivated out of necessity achieved without apology, and Black Detroit emerged as “a self-perpetuating cauldron of sepia excellence.”

The stories of Ziggy’s saints focus largely on the decades during and after the Great Migration that brought hundreds of thousands of southern Blacks to Detroit to escape Jim Crow and seek a living wage in auto and defense industries. The Black Detroiters, in Ziggy’s terms, became the “breadwinners,” and Black Bottom Saints vividly evokes the world they created, in which Ziggy “was the breadwinners’ emcee of choice and producer of choice—and proud to be so.”

“Back in the day, because of the breadwinners,” Ziggy recalls, “Detroit could support all-Black hospitals, and all-Black private schools, and even exclusive all-Black beach resorts . . . We gave the factory folk who worked in the automobile plants their proper respect. We loved those men who did that shift work that meant eight out of ten Black families in Detroit owned the home they lived in and could afford to go out to a club to hear live music any night they chose. Our breadwinners built this city. We remember when River Rouge ran twenty-four seven. Three shifts a day at the plants meant the show bars had two shows on Sunday and late shows every night, sometimes at 2: 00 a.m., for those who got off the late shift. That was the opportunity that created caramel Camelot.”

The Saints whose lives Ziggy chronicles in a work of unabashed hagiography range from national Poet Laureate Robert Hayden to funeral director and state senator Charles Diggs Sr. to jazz singer and bandleader Billy Eckstine to gospel singer Della Reese to UAW leader Marc Stepp to stride piano and tap dance duo Buck and Bubbles, and Arthur “Daddy” Braggs, the visionary behind Michigan’s Idlewild resort, which for many summers “hosted some 1,000 breadwinners, more Black doctors than in the whole state of Texas, and sweet soul sounds bouncing across a blue-black lake.”

Ziggy’s take on Sammy Davis Jr., as a young entertainer struggling to escape the shadow of two famous fathers, is one readers are unlikely to encounter elsewhere.

Telling the saints’ stories is often profoundly personal and also no new deathbed pastime for Ziggy. Early on, he explains that when teaching his young dance students, “I dropped bits and pieces about the Saints’ lives like breadcrumbs that marked a path out of the automobile plant for the breadwinners’ children.”

Introducing each of Ziggy’s 51 saints’ lives is a revealing secondary narrative involving Mari, a former dance student known as “Colored Girl,” whose perspective on the saints is always enlightening often as personal as Ziggy’s own. Unraveling the mystery of Mari and her relationship to Ziggy and the creation of the book is one of the great joys of this inventively constructed novel.

Reflecting on the life of Sadye Pryor, Ziggy’s aunt, “patron saint of teachers, principals, and librarians,” and “queen” of the world of Black clubwomen, Mari assesses what Black women’s clubs represented in the early- to mid-20th century: “They have been dismissed as overconcerned with trivialities, including home economics and the ‘respectability’ of the race. Colored Girl saw the club women another way: as warrior women who fought the battle of making everyday and earnest Black living visible; as women working in the company of women, prizing the company of women, fighting Jim Crow with to-do lists and club meetings.”

Rounding out the book’s assorted delights is a cocktail recipe to accompany (and complement, thematically) each saint’s story, supplying a recurring reminder that Black Bottom Saints serves to toast and celebrate its subjects rather than mourn them.

Black Bottom Saints is first and foremost a book of sublimely spun true stories untold, a wonderfully realized portrait of a vanished city, long gone along with its Gotham Hotel and Ziggy’s School of the Theater. It’s also a book about transmuting “trauma to transcendence” through Black institutions, cultural expression, “Motown music, and Black girl magic.”

The book aims to realize Ziggy’s remarkable vision of “mistery”: “his name for lost historical facts and lost cultural wisdom that he believed only dance, drum, song, and poem could reclaim.”

Alice Randall has ably succeeded in adding “novel” to that list. As a feat of reclamation for the Camelot-like heyday of Black Detroit, Black Bottom Saints, like the legendary impresario at its center, makes plentiful Motown magic.