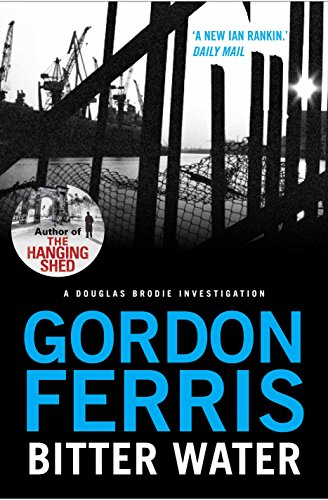 “At once taut and masterfully detailed, Bitter Water is a grim, inexorable swig of noir shot through with a riveting tale to excite even the most jaded reader of crime fiction.”

It’s the summer of 1947 and Glasgow is melting. The temperature is rising and so is the murder rate. Ex-policeman and ex-soldier Douglas Brodie has a new job reporting for the Glasgow Gazette, and finds no shortage of material for his crime column. It seems the people of Glasgow are fed up with the corrupt officials and dirty razor gangs that rule the Gorbals, as well as the incompetent police force that fail to stop them.

A typical Saturday night brawl adds a splash of color to the morning edition of the Gazette. But Brodie’s piece receives a hot-blooded reply: the declaration of a new war upon petty crime signed by a group of vigilantes: The Glasgow Marshals.

The vigilantes quickly fill the void left by lawlessness, and suddenly criminals that walked free from justice are found beaten and humiliated. At first the city cheers as they get their comeuppance. But Brodie knows all too well the dangers of taking the law into your own hands.

After his own stint at the war front, Brodie counts himself lucky to be back in his hometown, paying his way as the local crime reporter. And although the frustrated, demobbed men of Glasgow are taking an eye for an eye, Brodie has some sympathy for their cause.

So when a man is murdered, suspicion automatically falls on the Marshals, and the police are quick to agree.

But for Brodie, this crime is all wrong. The Marshals stand for justice, not murder. Amid the heated clash of populace and police, a calculated killing has been ignored. As violence spreads and the bodies pile up, Brodie enlists the help of advocate Samantha Campbell, and the duo begin to investigate the murder themselves, finding that the old saying always holds true: still waters do run deep.

Somewhere in the back of Brodie’s mind is the troubling question: How long before he and Samantha become the headlines?

Mr. Ferris never wastes a word, never misplaces a plot element, and from the very beginning sucks you right into the story, as is evident from the following:

“Bubonic plague starts with one flea bite. Spanish flu with one sneeze. Glasgow’s outbreak of murder and mayhem began simply enough and, like a flea bit, hardly registered at the time. In a volatile city of hair-trigger egos one savage beating goes unnoticed, a single knife wound is nothing special. Fighting goes with the Celtic territory, runs with the Scottish grain, is indeed fuelled by the grain, distilled to 40 proof. These belligerent tendencies explain my countrymen’s disproportionate occupation of was grave across Europe.

“So it’s just as well Glasgow’s a northern outpost of civilization. The cold and damp keep tempers in check for much of the year. It’s just too dispiriting to have a rammy in the rain. But even Glasgow knows the taste of summer. When the tarmac bubbles, and the tenement windows bounce back the light. Hen only the great green parks can absorb and dissipate the rays. When the women bare their legs and the men bow their bald pates to the frying sun. When lust boils up and tempers fray. When suddenly, it’s bring out your dead . . .”

At once taut and masterfully detailed, Bitter Water is a grim, inexorable swig of noir shot through with a riveting tale to excite even the most jaded reader of crime fiction.

Brodie and Campbell are utterly authentic as they form alliances in the face of overwhelming odds. The plot is tense, dramatic, and engrossing, controlled by Mr. Ferris’ wonderful ear for regional dialogue, history and characterization. The Brodie series is becoming totally addictive, and Bitter Water may prove to be Mr. Ferris’ best book yet.