The Bitter Taste of Murder (A Tuscan Mystery) 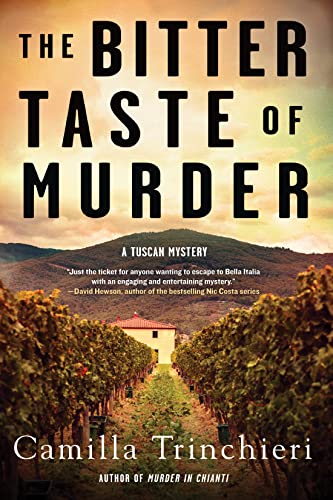 “Similar in pace and tenderness to the Ladies’ Detective Agency mysteries of Alexander McCall Smith, this mystery fits neatly into the traditional mold, providing an enjoyable read that’s intensely place-based and engaging.”

It’s no secret that Nico Doyle is a former New York City homicide detective. But his new life in the small town of Gravigna, in the Chianti hills of Tuscany, Italy, isn’t supposed to involve his old skills—he’s even mostly now accepted by the locals (The Bitter Taste of Murder is book 2 in Trinchieri’s new series). Comfortable with a routine of small restaurants and working friends, he’s “employed” as a full-time volunteer at a restaurant owned by his in-laws. Sure, he’s still mourning his wife Rita, and taking flowers to her nearby grave. But in a lot of other ways, life has re-started for him.

If only his friends were simply—friends! Salvatore Perillo, mareschiallo (marshal) of the carabinieri, enjoys cycling, visiting with Nico—and, as needed, pulling him into crime investigation. As Gogol, a very old man who’s a regular at the breakfast “bar” quips to Perillo, “You were Nico’s Virgil through last year’s journey into hell, or perhaps he was yours. Whichever it is, friends of Nico are welcome today.”

The mareschiallo’s presence in Gravigna this time involves a visit to town of a famous critic of Italian Wines, Michele Mantelli, who is “said to have the power to make or ruin a new vintage.” Soon Mantelli’s murder shakes up the community, and when it’s revealed that Nico’s friends Aldo and Cynzia had been threatened with a bad review for their wines, Nico can’t help caring.

“Did Mantelli truly have the power to bankrupt Aldo? And why did he want to? What was Cinzia and Mantelli’s relationship? . . . If Mantelli ruined Aldo’s business, he would ruin Cinzia too. None of it made sense, and it was none of his business, but Nico felt for Aldo.”

So when Mantelli turns up dead in a car accident, there’s some relief—until it’s clear that the wine critic had died before his car went off the road. And it’s looking like a convenient death for several others, too, including the wife Mantelli was about to divorce and perhaps even his current lover. The only way Nico can be sure his friends will be safe from suspicion is to accept Perillo’s invitation into the active investigation.

“[Nico] was bent over a baking sheet, tamping down small mounds of grated Parmigiano into flat rounds with the back of a spoon. . . . Each fritella, once roasted, was carefully lifted with a spatula and just as carefully added to a tray and sprinkled with chopped chives.” At the same time, Nico’s “boss” Tilde prepared “Yellow pepper stuffed with rice, sausage meat, onion, pecorino and tomato sauce.” The book’s kitchen prose enriches all the action.

So do the entangled threads of friendship, affection, and community that confirm Nico’s made the right choice to take up retirement (well, at least he’s only a crime-solving volunteer!) in his late wife’s hometown. The Bitter Taste of Murder makes it clear that the author’s studies in both film and creative writing have paid off. (She has eight mysteries published under a pseudonym as well.) Similar in pace and tenderness to the Ladies’ Detective Agency mysteries of Alexander McCall Smith, this mystery fits neatly into the traditional mold, providing an enjoyable read that’s intensely place-based and engaging.