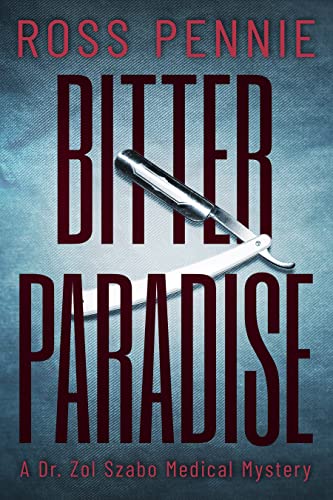 Although this is the fifth volume in the Dr. Zol Szabo Medical Mystery series, Zol steps out of the spotlight in order to feature Dr. Hosam Khousa, a Syrian refugee relocated to Zol’s Canadian town.

This is not to say the two doctors’ paths don’t cross. Indeed, they braid together one strand at a time until the mysterious polio case they’re both involved in is solved.

At the start of the story, Hosam is Zol’s barber. Back in Syria, before war ripped his country apart and devastated his family, Hosam was an esteemed surgeon. Zol, during the same period, rose through the ranks to become a key investigator in the Canadian public health service. He’s soon to marry his colleague, Natasha Sharma.

Interrupting both their plans comes a polio virus. Nothing like it has been seen since the 1950s, but this one doesn’t behave the same way. In fact, it’s rather like the corona virus ravaging the world in 2020, which is intriguing and disturbing, given that the author wrote this book before our current pandemic erupted.

Zol’s and Natasha’s job is to find the source and stop the epidemic. Hosam, who’s just trying to survive being uprooted and build back up to his profession, is being pursued and threatened by evildoers from his own country. The “bitter paradise” of title is what he finds in his new homeland.

Little does he know that the the virus source is directly tied to his family.

OK, so that’s the setup. What the book offers beyond a medical thriller plot is deep delving into character and conflict among people of different cultures, backgrounds, and motivations. In the same way the story is painfully contemporary with the virus problem, it’s also a painfully realistic study of human diversity in harmony and distress.

Hosam must make agonizing decisions just to stay alive and afloat. “He was not sure what had his heart pounding fastest: his fear of getting jailed and deported for thievery; his dread of the Caliph’s reprisals if he did not cooperate; his revulsion at working alongside a sadistic murderer; or his guilt at stealing from the decent citizens of the fair-minded country that was providing sanctuary to his family.”

Between him and his son and wife, they hold critical clues to the virus’s origin and pathways. Initially they don’t know they have these clues, but as they come aware, they fear revealing their disjointed knowledge because that would put the family in further jeopardy.

Zol and Natasha, meanwhile, are up against risk of infection as they plunge onward to trace the virus. They along with Hosam must deal with teenage boys in their families who have their own connections to the problem through internet gaming, and are keeping secrets out of loyalty or misunderstanding.

The situation is so much bigger than any individual that the story perforce is told through multiple viewpoints. This may be frustrating for readers who keep with the series to follow Zol and his supporting troupe. But since it’s physically impossible for them to cover all the ground and chase down all the clues to pull the threads together, the narrative must change perspective to keep the story moving. The author is extremely skilled at this, and ends each viewpoint chapter at a suspense point that compels turning pages.

He does not leave his characters’ personalities behind, however. This series has always offered some unique and memorable souls. Zol is the most unusual, with his uncanny sense of smell. This has helped him solve previous cases. An injury later added music:

“His neurologist had an explanation for this tech-free phenomenon: post-concussion synesthesia. A blow to the head a few years back had crossed a bunch of wires in his brain. He’d . . . woken up in a hospital bed with a new set of pathways linking his sense of smell to his hearing. Strong scents conjured musical sound bites so vivid they sounded like the real thing. Cumin summoned Miley Cyrus, cardamom brought on k. d. lang. The sensation happened less frequently now than it used to. Céline Dion had finally stopped bellowing ‘My Heart Will Go On’ every time he brewed a pot of coffee.”

But it does spring into action at inconvenient moments. While following a lead on the virus into a flower shop, “Suddenly he was hit by an intense floral scent. . . . To fend off what he knew would come next, he pinched his nose and held his breath. It didn’t work. Seconds later, Drake was in his head singing ‘Passionfruit’ at full volume. It was a terrific number, another one of his favourites and at the top of the charts, but the timing was terrible. This woman, already irritated by his unexpected presence, was going to think he was having some sort of fit unworthy of the region’s medical officer of health.”

Kind of hard to pursue investigations with such distraction going on!

But Zol knows how to handle it, and he perseveres. For readers, his condition adds moments of levity and/or interest in an otherwise serious pursuit. Zol’s business balances on the thin, scary line between life and death. In most other mysteries, that line is crossed in one-on-one violence through murder. Though murder occurs in this story, the real chill comes from the kind of threat that menaces everyone through infectious diseases.

The author writes about them with authority, having had a medical career in that specialty. His experience gives plausibility to the plots, and his compassion gives humanity to his characters. All of them, no matter what their ethnicity, nationality, physical challenge, occupation, economic status, sexuality, psychological weirdness, or whatever-the-heck, get the same treatment. In this respect the series is a role model for literature today.

At the same time, it’s classic adventure fiction. These factors combine to offer great, yet thought-provoking, entertainment. The combination has held steady through five volumes so far, leaving old fans and new to look forward to its continuation.