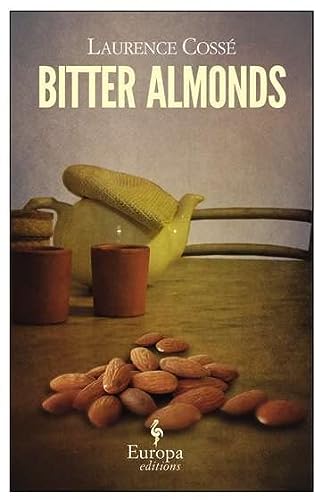 “Beautifully written and translated from the French, Bitter Almonds should be required reading . . .”

In Bitter Almonds Édith, a “comfortable” woman living with her young family in Paris, hires Fadila, a 60-year-old Moroccan immigrant, to assist her with ironing. Immediately, there is a productive alliance: payment for services rendered. But early in their relationship, Édith discovers that Fadila cannot read.

Édith offers to help her learn, not realizing the difficulties involved in such an endeavor. Headway in learning is followed by setbacks; sound and symbol disconnect much of the time.

After a long absence without practice they return to square one. Fadila is prone to guessing without thinking. Édith cannot at first understand the tangle of images Fadila makes when she tries to copy a couple of simple lines. After she finally writes her surname perfectly (Amrani), they hug each other.

“She remembers the first thing Fadila wrote for her, that little scribble of messy, unrecognizable signs: it’s absolutely clear that they’ve made considerable headway in seven months.”

But the elation is guarded as Édith realizes it is . . . “considerable headway with nothing at all.” She fights her own feelings of inadequacy in trying to teach her student.

Édith gains some insight when her husband tries to acquaint her with new software. She doesn’t understand what he is saying; he’s going too fast for her. “Édith is being asked to enter a mental world that is unfamiliar; to discover signs, a language, a system of symbols that are disconcerting. . . . She is lost. She feels too old. She can’t cope.” She does realize, however, that the demands on her are nothing like what she expects of Fadila.

The author has interwoven illustrations of life without literacy—an existence that a literate person cannot possibly imagine. Édith discovers, for example, that Fadila cannot understand her bank statement and is paying unnecessary fees. She avoids the metro—picture trying to decipher the site maps listing the stops or worse: the transfer points.

The story unfolds over many months. We learn about Fadila’s life as a North African immigrant in Paris. She lives in a single room and leads an isolated and lonely existence. She keeps her tiny television on without sound all of the time. Only later do we learn about the anguish of her early life that accounts for this coping mechanism.

Fadila’s three children struggling to make their own way also live in Paris and either cannot or choose not to spend much time with her. But they do step up when necessary. One daughter helps her to find work and drops in to chat occasionally; her son assists with a move to another location.

In spite of the drawbacks of being an immigrant living in Paris, it is a better existence than living in Morocco. Fadila sends clothes and money to family still living there. In Paris, she is able to work and take care of herself. All three children escape the tradition of arranged marriages.

Anyone interested in literary fiction is sure to be touched by this story. Beautifully written and translated from the French, Bitter Almonds should be required reading for any volunteer literacy tutor. Illustrated in seamless fashion are the realities and obstacles the late adult learner faces—in life and in the classroom, with hopes raised and dashed in nanoseconds.

Yet in spite of an almost existential tone to Fadila’s story, we witness her setbacks and disappointments in a realistic, contemporary atmosphere. Laurence Cossé provides insight into a poignant human story by showing us the value of just one personal relationship in fostering the dignity often denied an illiterate person.