Bite Me: A Love Story 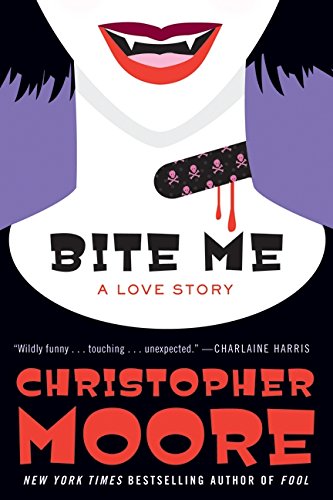 In the current rush and abundance of vampire novels involving teenage protagonists and their dark and brooding love for the perfect immortal undead, it’s getting harder and harder to come up with something new and interesting. Bite Me manages to do just that, and accomplishes it by both skewering the genre and its foibles and creating a story that fits perfectly into that same genre.

Bite Me is the story of Abby Normal, who calls herself the Emergency Backup Mistress of the Greater Bay Area Night. She’s sixteen, oversexed, independent to a fault, passionate, weird, in love with the macabre, and wants nothing more than to be a vampire. In the two books previous to this one, she’s found and attached herself to Jody and Tommy, who are the current rulers of the night, drawn herself to the attention of the local cops, made friends and enemies all over town, and fallen for a hopelessly geeky mad-scientist type who doesn’t know how to handle her but is flattered by the attention. Bite Me is the final act of a trilogy, but it doesn’t feel lacking if you haven’t read the first two parts; they’re summed up at the beginning and explained throughout as it pertains to the story—which is rich and complicated and ridiculous and still manages to be fun and thrilling.

Told in segments from the points of view of almost all the characters, the chapters all seem to have minds and lives of their own. Abby’s chapters are scatterbrained, stream-of-consciousness, and riddled with a mix of pop culture and goth culture references and modernisms of speech that will probably date the book in only a few years but are immensely fun to read. Meanwhile, chapters narrated by the Emperor of San Francisco are quietly dignified and a little old fashioned; chapters narrated by the old vampires are deep and historical in scope; and those narrated by Foo, the afore-mentioned mad scientist, are technical and strive for rational explanations, usually failing miserably in the lunacy of the book’s events.

And boy are the events loony: vampire cats are spreading like a plague through the city; Jody and Tommy are separated and have to save each other; an old-vampire clean-up crew is after everyone who knows what’s going on; Abby is trying to kill herself in such a way that she can come back as an undead seductress; the cops are starting to figure out what’s going on; Foo has trouble at home; homeless people are disappearing; and an old Chinese grandmother holds a secret formula that can help solve everything, but she doesn’t speak English. Every page is madness—and it’s a heck of a ride. One of the best parts is how Abby’s pop-culture-inspired idea of what vampire life is about keeps falling drastically short of the reality, and yet she keeps trying to force the two to match by willpower and stubborness alone.

Fun, crazy, articulate, surprising, break-neck, occasionally shocking and incredibly addictive, this is the book to read if you want to restore faith in vampire novels.