A Bite of the Apple: A Life with Books, Writers and Virago 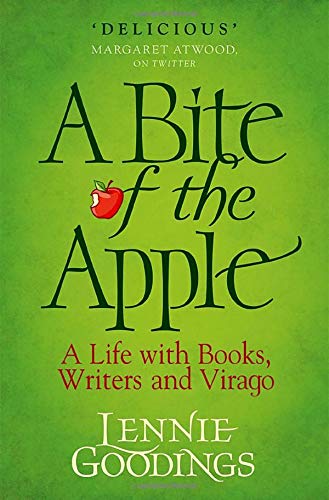 This little book is as candid and charming as its cover, and not coincidentally the kind of book its author, Lennie Goodings, likes best. This is to say, a book “that doesn’t quite fit neatly into categories,” not only following the vicissitudes of the Virago Press, but also musing on post-feminism, the craft of editing, “the intimacy of reading; the private seduction of being alone with words that are speaking just to you.”

Virago was founded in 1973, the year when the Watergate investigation was about to bring down President Nixon, and Britain joined the European Economic Community (EEC). Arriving from “the colonies” that is to say, Canada, in 1978 (fellow Canadian and Virago author, Margaret Attwood noted that in England in the 1970s, “being Canadian was sort of like being cross-eyed, only less interesting . . .”). Goodings approached Virago with an idealistic vision of it as a woman’s collective, only to find that it was already a force in the publishing world, which was at that time (and still is to a certain extent) somewhat of a gentleman’s club. Virago had already published 30 books, and launched its Virago Modern Classics list, which is still highly regarded. Virago was not run as a collective, but under the firm and hierarchical grip of Managing Director Carmen Callil, “but it did have a most generous attitude towards sharing things like tea- and coffee-making—and cleaning the office.”

Virago aimed to bring the issues and ideas of feminism to a mainstream audience, and to champion women’s talent and leadership, without getting into arguments about the meaning of feminism, and who it was for. Virago was market-driven while attempting to change the way the market was run; “living within the tension between idealism and pragmatism; between sisterhood and celebrity; between watching feminism wax and wane at the same time as knowing many battles are still to be won.” As well as devoted followers, this has of course earned Virago enemies from many camps including those who criticize it for being overly commercial and celebrity oriented (author Maya Angelou “liked to party”); and others who blame it for the ghettoization of women writers.

Virago was only one of many publishers dedicated to promoting change in the publishing landscape, and in 1984 a number of them got together to hold the First International Feminist Book Fair, which while recognized as “a commercial and political success,” was also shamed by its lack of disabled access and called out by Audre Lorde and others for its “outrageous lack of many women of colour on the committee.” It’s not clear whether “many” actually means “any” here. Lorde later called the “fair a monstrosity of racism,” a condemnation that Virago and other feminist presses swiftly took to heart and began consciously to develop a more diverse list of authors.

One of the most interesting chapters relates to the craft closest to editor Goodings’ heart, the craft of editing and the complex relationship between editor and author; and between the author and the phalanx of people, other than the editor, who are going to “groom” the manuscript in one way or another “ literary agent, copy-editor, proof-reader, jacket designer, production controller, print-run manager, rights manager, contracts manager, royalties manager, publicist, marketer, sales team (home, export, wholesalers) ware-house people, van drivers,” and later down the line the “librarians and booksellers.” And still people sit down optimistically to write books.

Does the world still need feminist publishers and women’s prizes for literature? For Gooding as long as there is still gender disparity between the numbers of reviews that men’s and women’s books receive, and while men still tend not to read books by women, then Virago and its allies and competitors in the field need to continue to flourish. A handy hint for optimistic authors: It has been speculated that books written by women with gender neutral names (Hillary Mantel, A. S. Byatt), or with a male protagonist, Cromwelll), always do better with a male audience.