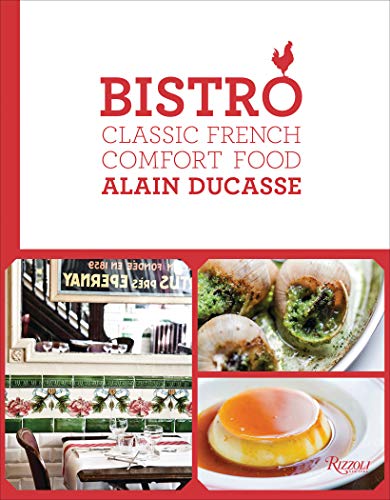 Anyone who has ever set foot in the Parisian bistros Allard, Benoit, and Aux Lyonnais will recognize many of the dishes in Bistro: Classic French Comfort Food. France’s celebrated Chef Alain Ducasse has assembled a selection of relatively homey dishes from these three restaurants, which are part of the more than 30 eateries he owns around the world.

If anyone knows about French bistro cooking and teaching it, it is Alain Ducasse, who has earned a collection of Michelin stars and who owns a cooking school in Paris. This grand master chef has also authored an ever-expanding library of cookbooks, including his famed encyclopedia Grand Livre Cuisine.

This newest volume, which could be considered a primer for cooking in a classic bistro, focuses strictly on the food. There is no verbal fluff. There’s no recipe introductions or cute sidebars. The only narratives are brief histories of the three bistros that provide the book’s recipes. For those hoping to learn about Ducasse’s journey to gastronomic stardom or his grand-mère’s favorite dessert, you’re out of luck.

Each recipe does, however, include French regional wine suggestions. As expected, recipes are written in meticulous detail, with ingredients listed in both metric and United States measures. The main recipe index is sparse, but it does include a section for recipes listed by restaurant, as well as instructions for “Basic Recipes” for stocks and sauces. There’s also a glossary of extremely basic cooking terms.

Like most of Ducasse’s cookbooks, Bistro is a joy for the eyes. Spectacular page-sized color photos accompany each recipe, and longing automatically sets in at the sight of glistening hunks of duck, lamb, and pork nestled in a cassoulet. A perfectly bronzed double-cut pork chop rests seductively in its bed of cabbage, and a tender slice of marjolaine cake makes you forget any thoughts of a diet.

Recipes are divided into the broad categories of appetizers, main courses, and desserts. The most interesting sub-category is titled Organ Meats. Tripe à la Lyonnaise, Crispy Pig’s Feet, Sabodet (pig’s head sausage) Cooked in Rasteau Wine, Veal Kidneys with Madeira Sauce—what Americans typically throw away turns into gastronomic works of art. Even if a cook is not inclined to seek out offal, cockscombs, and pig trotters, she will have fun reading about the rustic French dishes that call for them.

The majority of Bistro’s recipes greet you like long-lost friends. There’s Onion Soup, Grilled Salmon with Bérnaise, Duck Confit, Braised Chicken, and Rabbit in Mustard Sauce. Desserts include the French standbys Chocolate Mousse, Floating Island, Rum Savarin, and Tarte Tatin. All predictable bistro fare? Of course. But a step inside any bistro comes with expectations, which mainly include relatively plain décor and a reasonably priced menu that isn’t faddish.

Even though Bistro’s recipes aren’t considered haute cuisine, they definitely aren’t ho-hum either. Each dish is seasoned with the precision of a scientist, and is appropriately sauced, garnished, and finished. The downside to this perfection is that preparing it may not be everyone’s cup of foie gras.

Most recipes have multiple components, and there’s step upon step of instructions. Ingredient lists are long, and many call for items not easy to find. Anyone with a little time and kitchen finesse will find Bistro easy enough to tackle. But getting dishes to the table won’t happen in a few minutes, especially for novice cooks. There are a handful of recipes that can be tossed together quickly, such as Sole Meunière and Cocotte of Braised Grenaille Potatoes. These simple courses, however, are in the minority.

Regardless of cooking expertise, everyone will find this book a beautiful ensemble of classic bistro fare. The pâtés, soups, roasts, and tarts may grace the menus of Alain Ducasse’s vaunted restaurants, but they are also what is expected on a French grandmother’s table. No matter where they are served, these dishes will never go out of style. It is worth every serious cook’s time to master a few, and Bistro teaches the basics nicely.