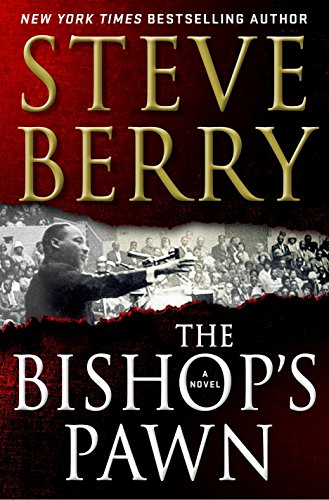 Do we really know what happened on April 4, 1968, when Martin Luther King Jr. was assassinated in Memphis, Tennessee? Did James Earl Ray act on his own, or was there an ongoing government conspiracy to bring down the civil rights movement and murder its charismatic leader?

Steve Berry returns his familiar protagonist Cotton Malone to his roots as a rookie Justice Department operative in The Bishop’s Pawn, the 13th in this series of thrillers. Set at the dawn of the new millennium, Malone is dispatched by handler Stephanie Nelle to salvage an extremely rare coin from an underwater wreck off the coast of south Florida. In addition to the coin, however, he turns up a file containing explosive information about COINTELPRO, a counter-intelligence program run by J. Edgar Hoover and the FBI, and its involvement in the assassination of Dr. King.

While The Bishop’s Pawn is a fictional thriller, Berry stays true to his modus operandi by integrating a great deal of historical background into his tale. As he explains in his Writer’s Note at the end of the book, the 1933 Double Eagle coin Malone chases actually exists, and COINTELPRO was also, unfortunately, a grim reality under Hoover.

Berry also weaves factual details of Dr. King’s assassination into the story, including Ray’s movements preceding the event and occurrences in the last year of Dr. King’s life. This layer of historical information enhances the fictional plot to kill Dr. King, which bears the code name “The Bishop’s Pawn,” and lends Berry’s story a veneer of plausibility that helps move the action along.

Berry describes this book as a travelogue of Florida, ranging from the Dry Tortugas and Loggerhead Key to Starke, Gainesville, and Disney World. He clearly works the same side of Thriller Street as his avowed models Clive Cussler and Dan Brown, mixing action and adventure with a puzzle to be solved and intrigue to be plumbed and understood.

Berry also notes at the end of the book that The Bishop’s Pawn represents his first attempt at a full length first-person narrative. It was his opportunity to focus exclusively on Cotton Malone’s point of view while exploring the character’s roots as a naval lieutenant and JAG lawyer setting forth on a new career as a Justice Department operative.

Unfortunately, it’s something of a lost opportunity. Berry appears uncomfortable with the demands of this particular point of view, and the character fails to engage. Unlike the eminently endearing Robert Langdon, presented by Dan Brown in each new thriller with some new wrinkle that further develops him as a well-rounded and accessible protagonist, Malone’s character is confined in The Bishop’s Pawn to a recurring sense of guilt over a failing marriage and not much else. His personality ends up coming off as stiff and flat.

Worse, he’s prone to very pat justifications of his actions. When he thinks about all the laws he broke in the first 24 hours of his adventure, Malone observes that “Eventually I would come to know that the mission was all that mattered. Sure, never hurt an innocent, but also never let a few laws get in the way.”

This facile and glib rationalization of Malone’s disregard for law, order, and justice conflicts unpleasantly within a storyline focused on the horrible misdeeds of J. Edgar Hoover and the murder of the most important person in the civil rights movement in the 20th century. Berry could have done a much, much better job of handling this element of Malone’s character.

Nonetheless, The Bishop’s Pawn is an entertaining read for thriller fans who enjoy a mix of fictional adventure and historical fact. Intended as a tribute to Dr. King on the 50th anniversary of his death, it also reflects Steve Berry’s devotion to historic preservation and remembrance of the past.