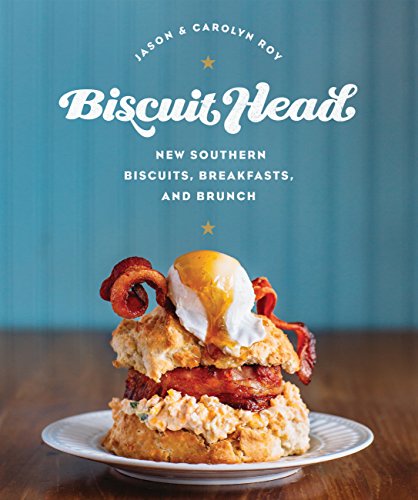 “for confident cooks who can spot when a recipe might go awry, Biscuit Head provides good inspiration for updated Southern classics.”

At Biscuit Head restaurants in Asheville, NC, and Greenville, SC, traditional cathead biscuits take center stage. Supposedly named for being as big as a cat’s head, the restaurants’ versions get topped with homemade jams, gravies, and infused honeys, and sandwiched with fried chicken and other fillings. Opened in 2013 by Jason and Carolyn Roy, the restaurant quickly found a following.

The owners include some fun touches in their offerings—a jam bar, a flight of gravies to top a few biscuits, an array of homemade hot sauces—and share recipes for those in Biscuit Head, as well as some side dishes and biscuit-centered desserts.

Interestingly, the basic “classic cathead” biscuit is the recipe bakers could easily skip, substituting their own favorite biscuit. They are tall, and light enough, but they bake at a low temperature, so they don’t color nicely. And because they require half soft Southern flour and half cake flour, they’re not especially inexpensive, making it more frustrating when they produce nothing special.

Biscuits are a forgiving food; bakers who claim a fear of them—like that of pie crust—really need do little more than keep the fat cold and their mixing touch light. Even today, when fewer adults grew up around simple country cooking, many still fondly recall some older relative who made biscuits purely by feel, producing light biscuits every time.

But that doesn’t mean cookbook authors shouldn’t aim for precision in guiding their readers. Biscuit Head’s authors don’t quite seem to know what audience they’re speaking to—experienced bakers or newbies? So even when they give what seem to be detailed instructions, some of the most useful details go unsaid.

Details such as measurements by weight: There’s really no excuse for leaving this out in any baking book today, with inexpensive scales easily available to bakers who’ve woken up to their value in creating consistent results. (And it’s hard to imagine that the restaurant’s cooks don’t measure by weight.) The authors don’t describe how the biscuit dough should feel, and using non-weight methods to measure can easily produce too dry a dough, especially as this one borders on dry regardless.

The one place they do use weight is in the yield of biscuits—but is that weight before or after baking? And though the authors call for a large ice cream scoop to portion out the biscuits, they don’t define large, when it would have been useful to say “1/2-cup scoop,” which seems to be what they intend. Of course bakers can go for whatever size they prefer, but simple details like this are a mark of good editing. Throughout the book, little issues like this crop up—for another example, the authors seem to be speaking to readers who have not canned before, providing basic canning instructions, but then leave out important details like stirring the jams as they cook.

That said, as long as you stir, the spiced cherry jam takes good advantage of the Roys’ “pie spice,” a mix of cinnamon, nutmeg, ginger, allspice, cloves, cardamom and lemon, with a touch of sorghum or molasses adding depth. (The authors don’t take a stand on what cherries to use, noting that frozen are also fine; a test with frozen sweet cherries suggests tart cherries would be the better choice, as would a light molasses.) Flavored butters—such as apricot white ale butter, sriracha honey butter—infused honeys and fruity hot sauces round out the “on your biscuit” chapter.

To stuff the biscuits, the Roys include several variations on pimento cheese, fried items such as green tomatoes, chicken, catfish, and chicken-fried tofu, and variations on homemade bacon (including a slightly scary s’mores bacon that takes salty-sweet to another level).

The chicken, with a mimosa-inspired brine of orange juice, a touch of champagne, coriander, curry powder and paprika, coated in a spicy dredge, comes out crisp and moist. How to use it? Oddly, there’s no mention of it in this recipe. Thorough readers will find an explanation tucked away in the notes that follow the classic biscuit recipe: the authors pile a biscuit high with the chicken, sweet potato chai butter, sriracha slaw, and a poached egg.

They round out the recipes with sides such as grits (for which they suggest cold-smoking goat cheese, but fail to suggest how much to add to the grits), collards, slaw and eggs, and desserts made from leftover biscuits, including biscuit French toast, biscuit dough fried into doughnut holes and chocolate biscuit bread pudding.

By the end, this book fails to hit every mark, but for confident cooks who can spot when a recipe might go awry, Biscuit Head provides good inspiration for updated Southern classics.