The Birthday Girl: A Novel 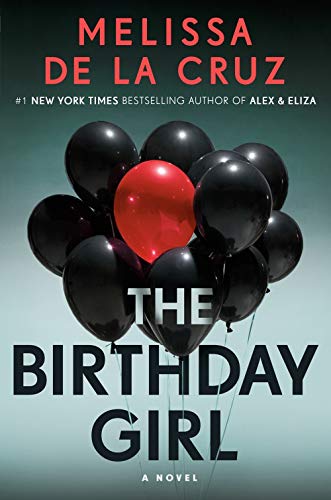 Melissa de la Cruz is a #1 bestselling, critically acclaimed, award-winning author best known for her YA fiction. Her books have sold millions, topped USA Today, the Wall Street Journal, and the Los Angeles Times bestseller lists, and been published in 20 countries.

This, her 50th book—yes, that's 50!—and the first one she's written for grownups, is marketed as thrilling, suspenseful, and surprising. Sorry to say it is none of that. Rather, this talky, plodding, slow moving story is neither thrilling nor suspenseful, and readers will figure out most of the surprises well before the halfway mark.

Including an identity switching plot point.

That's not a spoiler, dear readers. The plot is so transparent and predictable, you'll see it coming a mile away. However, the one-percenter name-dropping that anchors the narrative may be amusing and of interest to some non-one percenters.

Okay. There is one tiny surprise at the very end that readers may or may not see coming, and may or may not be happy about considering the unlikability of the protagonist.

Fast forward 24 years. Ellie now has a handsome husband (recently unemployed), twin sons (spoiled and undisciplined,) a ten-year-old daughter (from a previous husband,) and a college age stepdaughter (from her current husband). She is head of a trendy fashion design empire, well-traveled, wealthy beyond imagination, and living the good life as the owner of three homes:

The story is told in alternating chapters, switching back and forth with scenes from the present and flashbacks from the past. Each chapter is clearly identified by time and date, but some of the flashbacks contain mini-flashbacks or narratives of an event that occurred even earlier in the past, so it does tend to get confusing and some re-reading may be necessary to understand who, what, when and where.

When the book opens, Ellie is planning a huge shindig to celebrate her 40th birthday. As befits her elevated status in life, she has purchased (rather than rented) and redecorated a mansion in Palm Springs as a place to hold the party and impress her friends, acquaintances, enemies, frenemies, and an extended list of celebrities, most of whom she doesn’t even really know.

Stepdaughter Samantha, a student at Stanford, has unexpectedly turned up at the front door bringing college age melodrama she refuses to discuss. This reveal, as others, turns out to be relatively mild. (This is a book for grownups.)

Between soothing flaring tempers, juggling crises, and heading off potential party disaster involving caterers, florists, a personal assistant, and household staff, Ellie is reading and answering texts from her business partner and party invitees. A text comes in from someone in her past which is presented in the book as a mysterious and somewhat ominous foreshadowing, but turns out to be neither a jaw-dropping surprise nor a calamitous one.

Instead of creating authentic literary suspense, this author has used trickery and gimmicks to validate contrived plot twists. YA readers may not mind or even notice unfair deception in books they enjoy—vague, misleading narrative and unclear points of view—but grownups, for whom this book is written will feel fooled, misled, cheated, and underestimated.

Overall, a disappointment from an acclaimed author, and a thrown together, mishmash of an ending that you may have already figured out anyway.