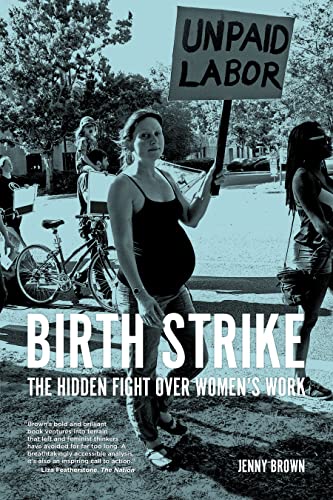 “Is a baby a commodity? Is pregnancy and childbirth work? Is raising a child a job?”

Is a baby a commodity? Is pregnancy and childbirth work? Is raising a child a job? These are among the provocative questions that inform Jenny Brown’s study, Birth Strike: The Hidden Fight over Women’s Work.

Brown is a feminist without sentiment, a Marxist without humanism. In this well-researched work, the author seeks to strip away all sentiment from people’s—especially women’s—understanding of the economic role of the domestic services women perform. She sees such service as a form of undervalued and unpaid labor. These services include pregnancy and childbirth, rearing a child and all the domestic chores required to maintain a household, and taking care of the elderly and infirmed. As the old saying goes, a woman’s work is never done.

This argument is compounded by the book’s underlying thesis, the “baby bust.” She reminds readers that during the post WW-II era of the “American Dream” “the wages of one full-time male breadwinner” was enough to support a wife and kids, but now “two breadwinners are necessary to support a family.” In the face of this historic change, Brown argues, “women are deciding to have fewer children.”

Brown identifies two significant consequences of this development. First, corporate and political “elites are foretelling economic doom if women don’t step up reproduction.” She quotes a conservative writer who asserts, “declining birth rates constitute a problem for the survival and security of nations . . . in the broadest existential sense of national security.” Second, she stresses that the elites are using the power of the state, including the Supreme Court, to restrict a woman’s right to an abortion and limit contraception and birth control information (especially for young girls). The outcome of these developments is a decline in fertility rate.

The decline in the fertility rate is occurring at a time when life expectancy has significantly increased. Brown notes that in 1900, U.S. life expectancy was only 47 years and by 2018 it has jumped to 79 years. Compounding this picture, the Guttmacher Institute reports that nearly two-thirds (62%) of all women of reproductive age use a contraceptive and nearly all women aged 15–44 who have had sexual intercourse used at least one contraceptive method. Equally significant, between 1991 and 2014, the teen birthrate fell by nearly 40 percent, to 24.2 births per 1,000 females from 61.8 births, due to sex ed and use of contraceptives.

Embracing a traditional Marxist analysis, Brown argues that women are part of the “reserved army of labor.” She repeatedly reminds readers that conservative policymakers promote anti-abortion and anti-birth-control policies in order to promote an increase in the birth rate. The increase would help foster cheap labor. She details her critique through extensive discussions of birth rates and women’s work in terms of immigration, race, and labor practices.

She also makes clear that the U.S. is not alone facing the “below-replacement birth rate”; other countries facing a similar decline include China, Japan, Germany, and the UK. She insists that “the fight over the birth rate is mainly aimed at extracting another type of cheap labor: the labor of bearing and rearing children.”

Amidst her rigorous analysis, one small question comes up. In a chapter reviewing the history of the debate over the birth rate, she notes that in the early 20th century, leading radical socialists like Rosa Luxemburg, Clara Zetkin, and V. I. Lenin argued against what they believed was the moderate socialist position promoting the “birth strike” to contest capitalism.

While apparently intellectually and politically identifying more with radicals, Brown argues: “A birthrate slowdown or strike, accompanied by feminist organizing and protest, might pressure the power structure to provide better working conditions for reproductive work, but the problem isn’t too many children to being with.”

Drawing on the experiences of other advanced Western society, Brown recommends that the U.S. needs to introduce a national health care program, free abortion on-demand and birth-control, universal free childcare (and eldercare), parental leave for all, and a shorter work week. It’s unlikely that a birthrate strike will do much to realize these important goals.