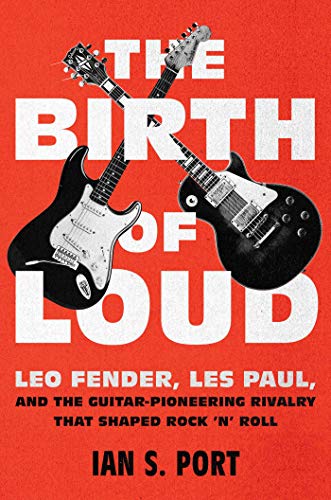 “Port establishes Leo Fender’s unique perspective on the world of electric noise he helped create, as he innovated and borrowed and cobbled his way to the world’s first production-model solid-body electric guitar.”

"History Lesson, Part II," a memorable track from the Minutemen's 1985 LP Double Nickels on the Dime, doesn't purport to tell the history of rock 'n' roll, punk rock, or even much of the L.A. punk scene, so much as it recounts how two unremarkable kids from San Pedro, D. Boon and Mike Watt, discovered punk rock and found a home and a future there.

The undeniable "lesson" in the song isn't found in the name-checks or the sketched scenes from the group's youth, but in the inviting, indelible line, "Our band could be your life.” Though that line might have played differently in another band’s song, for the Minutemen it wasn't a narcissistic call to worship—just an unassuming way of saying, "If we can do this, so can you."

The band included "Part II" in the song's title in deference to another "History Lesson" song from an earlier album that wasn't half as inspirational lyrically, but showcased more of Boon and Watt's churning Fender Telecaster and Gibson Les Paul Signature guitar-and-bass attack.

A more broadly revealing chronicle of how those solid-body guitars ended up in the hands of Boon, Watt and millions of kids like them—and how the electric guitar became the unlikely instrument of a mid-20th century revolution in youth culture—is found in Ian S. Port's definitive history of the electric guitar and its two foundational personalities, The Birth of Loud: Leo Fender, Les Paul, and the Guitar-Pioneering Rivalry That Shaped Rock 'n' Roll.

Though Port never mentions the Minutemen, and though neither Fender nor Paul would have much liked their music (or that of most rock bands), The Birth of Loud stakes a solid claim to the title "History Lesson, Part I" simply by focusing on the origins of the instrument that electrified generations of restless teenagers in the decades that followed its invention as surely as the Tennessee Valley Authority electrified the American South.

The role of Leo Fender and Les Paul in the history of rock ’n’ roll is more challenging to chart than the roles of, say, Elvis Presley, the Beatles, or Led Zeppelin. But theirs is a fascinating and compelling story, especially in the hands of a writer as committed to lively narrative as Ian S. Port.

In the early chapters of The Birth of Loud, Port quickly gets down to the business of describing how those famous names found their ways onto the necks of all those legendary guitars, beginning with the resistance both men encountered in their quest to convince the music industry of the 1940s that the world needed amplified, solid-body guitars.

Though amplified guitars existed in 1940, they were either traditional hollow-body models with their natural sound boosted by electrical amplification, or the lap-steel guitars used in Hawaiian music and Western Swing, which the music cognoscenti considered a fundamentally different animal. “A guitar was inherently a marvelous thing,” Port writes. “Beethoven himself had called it a ‘miniature orchestra,’ since it covered four octaves and could be used to play lush chords as well as sprightly melodies.” Intrinsic to its appeal was the “rich, airy tone” and “woody warmth” supplied by its vibrating strings and hollow-bodied construction.

Les Paul, a visionary guitarist from Waukesha, Wisconsin, envisioned the solid-body electric guitar as vital to his career as a musician, a way of making music no one else could make at the time. Seeking a louder, purely electric guitar sound that would deliver the sonic impact he imagined but couldn’t produce, Paul tinkered with a solid hunk of wood and a homemade electric pickup until he’d constructed a “lumberyard mutant” he called “The Log.” While intermittently hinting at the sound he was looking for, the Log itself did little more for Paul than electrocute him in his Queens apartment and draw muffled chortles from the Gibson executives to whom he pitched the concept in their corporate offices.

Leo Fender, by contrast, was no musician. A tinkerer and innovator by inclination and a self-taught electronics repairman by trade, he ran a radio shop in Fullerton, California that counted among its clients the top “cowboy jazzmen” steel guitarists in Western Swing at the mid-1940s peak of the genre’s popularity.

Port ably introduces readers to Fender amid the jitterbugging maelstrom of a Bob Wills and His Texas Playboys gig at Santa Monica’s Aragon Ballroom, in the disastrous moment when the steel guitarist’s solo explodes in a “YOOOOOOOOOWWWWL” of ear-splitting feedback, spurring working guitar tech Fender into action.

It’s the first of many dramatic music scenes Port brings vividly to life in the book, from Muddy Waters’ howling Telecaster transforming a generation of virgin-eared young Brits into electric blues aficionados at the Leeds Festival in 1958 to surf-rock icon Dick Dale’s high-decibel, “squall of electric nails” performances at the Rendezvous, to Jimi Hendrix at Woodstock.

But from the outset, Port establishes Leo Fender’s unique perspective on the world of electric noise he helped create, as he innovated and borrowed and cobbled his way to the world’s first production-model solid-body electric guitar. “Leo loved music and the sound of instruments,” Port writes, but he “would never learn to play the guitar. Later, he’d explain that his enjoyment of the instrument stemmed from the precise pattern of harmonics produced by its strings. Where others heard music, Leo Fender heard physics.”

Paul and Fender made their mark in the guitar world differently. Paul emerged first as an innovative record producer who pioneered multitracking techniques in his home studio and offered flexibility the big studios couldn’t match. He rose to stardom in the pre-Elvis 1950s through constant touring and TV appearances with his second wife and musical partner, Mary Ford, a powerful singer and Paul’s equal on the guitar.

The Les Paul-endorsed Gibson guitars that bore his name became industry standard, alongside the Telecasters and Stratocasters Fender began building after converting his radio shop to guitar production. The Fender factories grew constantly for nearly two decades to meet demand as teenagers everywhere attempted to get their hands on the instruments their heroes played.

Port can spin out evocative, succinct rock ’n’ roll writing with the best of them, whether it’s his note-perfect description of “Lover,” the first groundbreaking, multitracked record Paul made with a Les Paul Gibson guitar, or his description of Carl Perkins’ 1956 smash “Blue Suede Shoes” as a “slab of stop-time genius.”

But Port is at his best the conveying how Paul and Fender’s vision contributed to a musical explosion they neither anticipated nor participated in publicly, as well as the high and low moments of lives that didn’t always profit from what they brought to the world. Without ever declaring either man the Inventor of the Electric Guitar, Port portrays their profound impact on the emergence of an instrument that established the essential musical vehicle of rock ’n’ roll, along with the cultural transformations it would inspire.