The Birds That Stay (A Russell and Leduc Mystery) 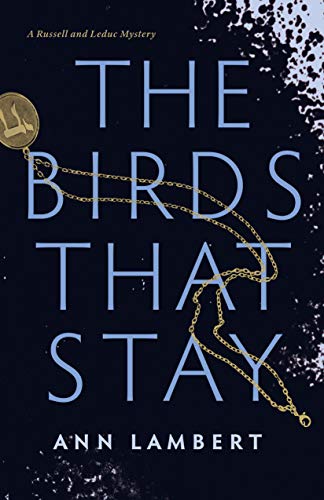 “a fascinating and gripping tale of suspense, and there’s even a hint of romance here.”

“There was nothing there. She turned to another sound behind her. And then she understood.”

The central problem is clear: someone has murdered Ann Newman, and it’s up to homicide detective Romeo Leduc to track down her killer. From there things become intricately intertwined and at times a bit confusing.

We meet a string of interesting characters. There’s Marie Russell, a divorced naturalist who has been left the task of making arrangements for her mother who suffers from Alzheimer’s disease; there’s Ennis Jamieson who has made a career for himself handling the affairs of aging women in retirement homes; there’s Ti-Coune Cousineau, a small-time thug who may be Ann’s killer; and there’s a mysterious figure who leaves threatening notes for Jamieson. And there are other less prominent members of Ms. Lambert’s cast: Louis Lachance who discovers Ann’s body; Claire Russell, Marie’s mother; Bridget Jamieson, Ennis’ wife; and Nicole LaFramboise, Romeo’s very pregnant sidekick.

The action is set in present time, in the rural environs of Montreal, with the long, dreary southern Quebec winter fast approaching. What exactly did Ann Newman “know” when she saw her killer?

Immediately, we are introduced to a number of possible motives for the murder: there is some valuable resource buried on the property; there is a huge stash of money somewhere in the house; the murder is a random act of violence perpetrated by a motorcycle gang. But we gradually discover that there is a much more deep-seated reason, one that carries back more than 75 years, and several of the characters are eventually able to reveal all.

The Birds that Stay is also a political statement. After World War II, thousands of Nazis fled to Hungary. Then, after the 1956 revolt was quashed by the Soviets, many sought asylum in the West. In sympathy to the perceived victimization of so many innocents, Canada opened her doors to those fleeing the communists. The result was an infiltration of almost 50,000 Nazis and Nazi sympathizers, most of whom hid their identities and blended into the Canadian population. Few were discovered and even fewer were brought to justice. The novel is an outcry, even if belated, for these war criminals to be brought to justice.

One of the difficulties with the novel is the need for a tremendous amount of backstory. There is a long passage during which Marie recalls most of his neighbors from when she was growing up. Another device Lambert uses is the discovery of a cache of saved letters the author employs to build her portrait of “Ann Newman.” Neither technique feels organic to the flow of the narrative.

Perhaps Ms. Lambert may be trying to accomplish too much in this novel, introducing some characters who disappear later, Louis Lachance among them, and delivering a novel with a political message. Nevertheless, she has constructed a fascinating and gripping tale of suspense, and there’s even a hint of romance here. Let’s hope Detective Romeo’ Leduc makes another appearance soon!