Birds of a Lesser Paradise: Stories 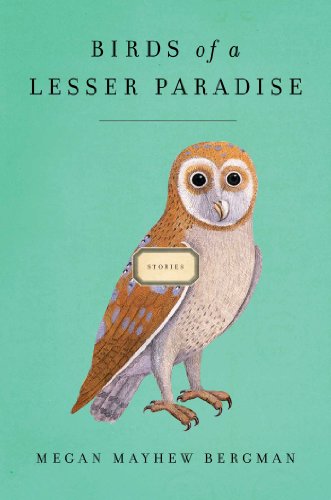 “Surely there will be other and better works from Ms. Bergman in the future, when her author’s eye is attracted to wider fields of vision. For now, the reader must content himself in the fact that within this collection of short stories there are, among the ravens, a couple birds of striking plumage.”

In the ten stories contained within the new collection, Birds of a Lesser Paradise, author Megan Mayhew Bergman’s characters live lives of swallowed-down emotion in a world of rat-a-tat sentences. And—true to the title—their lives are intertwined with exotic birds far more than yours or mine.

They seek them everywhere: “I want to see birds no one else has seen, Smith was saying. I printed out the checklist for North Carolina.”

And the reader goes helplessly along for the ride.

In the first and most unique story, “Housewifely Arts,” a single mother takes her small son on a journey, as she searches for a parrot that can mimic the voice of a dead mother:

“I haven’t told Ike that we’re driving to a small roadside zoo outside of Myrtle Beach so that I can hear my mother’s voice call from the beak of a thirty-six-year-old African gray parrot, a bird I hate, a bird that could beep like a microwave, ring like a phone, and sneeze just like me.”

In another, a blue heron is spotted. Condors nest in another. And predatory birds sweep down on helpless squirrels, who scream at the sight of death in a third. The sky is alive with birds. As is the Great Dismal swamp, where the very rare white-billed woodpecker is sought, but never found.

Thus the stories pulse with the rara avis. And our author is a rare bird herself.

Her words are her own; each description is a tone poem.

“My son is a forty-three-pound drama queen, a mercurial shrimp of a boy who knows many of the words to Andrew Lloyd-Webber’s oeuvre. He draws two eyes and a mouth on the fogged-up window.

“Baby, I say, don’t do that unless you have Windex in your backpack.

“I watch him in the rearview mirror. He vogues like Madonna in his booster seat. His white-blond shag swings with the bass.

“‘You should dress more like Gwen Stefani,’ he says.”

Note that our author has chosen to dispense with the quotation marks that others use to denote quoted speech. Not for her, such things for she is a rare bird.

There is a joyous wallop in the first story, in its wonderfully unique storyline, and in the way in which the story captures the regret that we feel at the death of a parent, after which no effort made at loving and forgiving in the moments before the metaphorical predatory bird swoops in are sufficient or worthy.

Ms. Bergman captures with sad finesse the impending loss, the actual loss, and the memory of loss—all vividly and all with understated, moving clarity.

And yet. And yet there is in reading each successive story, a sense of falling off, as, in pouring over what has been stuffed between the covers here, the reader uncovers the truth: that the stories here are more or less a continued retelling of one story, with the characters names changes with each new title.

In Birds of a Lesser Paradise, that paradise is a narrow trough of a place, populated by fewer things than even the Garden of Eden. Here we have parents, mothers mostly, and most are dead, or fading fast. Cancer often enters in. Dementia is rife with mothers and fathers. Loss is everywhere.

Veterinarians are everywhere as well. They populate the stories as cops do prime time. After a story or two, when the reader has wised up to the point of waiting to see which character will be the vet this time out, he begins to yearn for a teacher, a doctor (we do get a couple of those, tending after dying parents), a farmer, a ballerina. But in our setting, in story after story, professions go unknown, unnamed, save the veterinarian.

And surprisingly, given all the vets, the dogs that run through these pages—and there are plenty of them—do so at their own risk. The usual dog’s life of lying about and being petted, eating, scratching, and snoring is not for these dogs. These are abandoned at sea. They fight bears and coyotes. They are mistreated and mournful—so much so that the reader hopes that on the great wheel of reincarnation it will never be his fate to be born as one of these dogs—not Salli, or Betsy, or Prince, or Vito, or Zydo—especially not Zydo.

There is an awful sameness to the material gathered together in these ten stories. So much so that, in gathering them together, that author has created a variation of Groundhog Day in grave need of a deadpan Bill Murray.

In retrospect, it is difficult to separate out the individual stories, with the exception of the aforementioned “Housewifely Arts” and the wonderful, sly “Yesterday’s Whales,” a story that shows the author’s potential for other, more interesting tales.

But for the rest, the path ahead is illuminated early on: the men, loved or not, leave. The women—most especially the 30-something women left behind to wonder what default within caused that man to go—ponder life and loss and bury their dogs and/or parents.

All of which frustrates, because Ms. Bergman is a writer of no small talents. But one in great need of a guiding hand. Most especially in “Another Story She Won’t Believe,” a tale so maudlin—the story of an alcoholic woman and her aye-aye (better known perhaps as the “death angel” of Madagascar, one of several exotic mammals to pop up in these pages along with all those birds), a tale so removed from simple reality that, in the course of a ice-storm caused power outage, the telephone answering machine still mysteriously works, allowing the woman to be heckled by voices in the dark.

With her clockwork plot patterns so precisely set, and with each story repeating what we have been told before, the author seems bent on strangling her reader’s interest. It seems that, along with a gift for words themselves, a modicum of imagination is called for. Or am I reading too much into the fact that the author’s husband is a veterinarian?

Surely there will be other and better works from Ms. Bergman in the future, when her author’s eye is attracted to wider fields of vision. For now, the reader must content himself in the fact that within this collection of short stories there are, among the ravens, a couple birds of striking plumage.