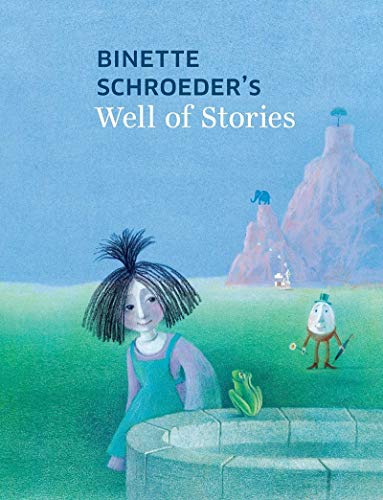 “As a fairy tale collection, this is similar in style to Hans Christian Andersen. As an artwork collection, it mirrors surreal painters like Leonora Carrington. But as a contemporary catalog Binette Schroeder's Well of Stories stands on its own merits.”

Ten stories and a handful of comic strips from 1969–2014 fill the pages with high powered yet subtly graceful illustrations. With one exception her style is distinct and natural. Lelebum is the exception, delivered in a graphic voice with bold primary colors. Yet, regardless of the style, emotion and wonder take root, clearly demonstrating why Schroeder is one of Germany’s beloved illustrators.

Each story reveals characters who deal with some social idiosyncrasy or personally unfulfillable desire, the realization of which begins in childhood, but truly remains all throughout life. Our sweet Lelebum is the only elephant in the world who is blue, when he desperately wants to be gray like everyone else; Archibald will stop at nothing to find the one thing he lost that was so much a part of who he is he can’t go on without it; Flora is burdened by the grass-is-always- greener syndrome and creates an elaborate imaginative scheme to add more to her life.

Florian and Tractor Max tackle the difficulties that arise in building a friendship; The Ratatatam train engine puff puffs around the world looking for a friendly place where he fits in; Crocodile finds a remedy to consumer greed, useful only in works of fiction; and Sir Lofty and Sir Tubb demonstrate the fine line between celebrating diversity and craving equality.

Sir Lofty and Sir Tubb win the vote (if there were a vote to be won) for best design, best visually strange and mysterious illustration effects, and best character development with clever resolve. Being one of the more recent publications, it has a slightly fresher feel to it and a sketchy pen and ink quality that is noticed particularly in its placement toward the end of the collection, sandwiched between two older projects.

As a fairy tale collection, this is similar in style to Hans Christian Andersen. As an artwork collection, it mirrors surreal painters like Leonora Carrington. But as a contemporary catalog Binette Schroeder's Well of Stories stands on its own merits.