The Bin Laden Papers: How the Abbottabad Raid Revealed the Truth about al-Qaeda, Its Leader and His Family 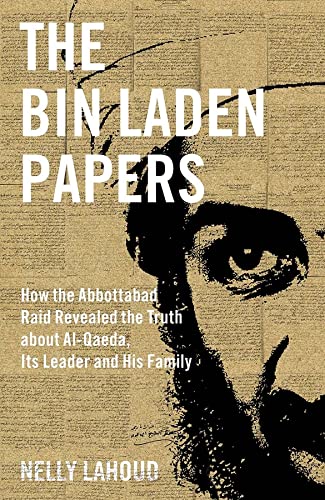 The author of this book, veteran terrorism expert Nelly Lahoud of the New America Security Program, sifted through 96,000 declassified files (and 6,000 Arabic pages) seized from Osama bin Laden’s compound as part of the May 2011 raid in Abottabad, Pakistan. What she found, and presents here, changes our whole view of al-Qaeda, how it operated, and how it was affected by the US invasion of Afghanistan in the wake of the 9/11 attacks.

Make no mistake, this is an important book that should be widely read. Broadly, it shows us a bin Laden singularly focused on attacking the United States again after 9/11, in the hope of a pre-emptive strike that would force the US out of Arab lands—but lacking the means to carry out such strikes. Ironically, with the US exit from Afghanistan, bin Laden’s goal has now mostly been accomplished—at least in terms of boots on the ground. But al-Qaeda was not a factor in that exit.

The private correspondence between bin Laden and his lieutenants, delivered by courier, shows a man eager to be a continued actor on the international stage, but cut off from modern communications, current events, his own vast fortune, and operational command.

Bin Laden was estranged from many of the other jihad-minded groups. He was blamed for the devastating loss of Afghanistan—a central refuge for the groups—and his single-minded focus on the US, when other groups had more local concerns.

Despite having access to these bin Laden papers, American officials continued to make assertions that were blatantly wrong about al-Qaeda and its supposed allies. President Trump said in 2018 that Iran “supports terrorist proxies and militias such as al-Qaeda.” Secretary of State Mike Pompeo said just before he left office in January 2021 that Iran had become a “new base” for al-Qaeda.

In fact, Iran, for its own reasons, largely broke the back of al-Qaeda. After Afghanistan ceased to be a safe haven in early 2002, many al-Qaeda fighters as well as many members of bin Laden’s family fled to Iran. But far from embracing these new arrivals, the Islamic Republic put many of them in jail. This was in part because—in a division that’s often underestimated by the West—Iran is a Shi’ite country, and al-Qaeda (and Saudi Arabia) is Sunni. Jihadis acting in al-Qaeda’s name attacked or threatened some of the Shi’ite holy shrines in Iran, and that wasn’t going to be tolerated by the theocratic state.

The Islamic State was also Sunni, but differed fundamentally with al-Qaeda on targets and tactics (though bin Laden helped fund it initially.)

Lahoud writes that when the jihadis fled to Iran “they had hoped that their journey would be some sort of stairway to a safe haven, and certainly not the road to hell that they found themselves treading.” One bin Laden son made a harrowing escape from an Iranian prison, but was taken out in a drone strike not long afterward. With his family imprisoned, al-Qaeda had to mute what would otherwise be full-throated criticism of Iran.

All this had a profound effect on al-Qaeda’s ability to wage jihad. “With its senior leaders detained in Iran, and the rest ‘afflicted’ in the border area between Afghanistan and Pakistan, al-Qaeda’s international terrorism was halted,” Lahoud writes. Further, bin Laden, in hiding, lost operational control of the group between 2002 and at least 2004. Also, by 2004, most of al-Qaeda’s senior leaders had been killed or neutralized.

But bin Laden had plans, all aimed at the US. At one point, he directed that only states that had voted for George W. Bush in 2004 be targeted—because of the invasion of Iraq. He wanted to pack small planes with explosives, smuggle undetectable materials onto airliners, derail trains, and seriously disrupt the energy supply with simultaneous attacks on large oil tankers. These latter plans were the most detailed, though unrealized.

Bin Laden wrote, “Our plan is to sink a large number of crude oil tankers, prioritizing the largest vessels. We want to do so in several simultaneous attacks. . . . The main goal is to sink them, because that would cause the enemy huge losses, leading to a global economic crisis.” Al-Qaeda’s leader mused about avoiding the enemy’s radar with wooden or rubber boats, not fiberglass. US military analysts said that bin Laden’s operational plans were impressive, but he was very wrong to think such attacks would force the US out of the Middle East.

There’s a whole lot more in The Bin Laden Papers, and a revelation on nearly every page. It’s not light reading, but in terms of understanding al-Qaeda between 2001 and 2011 it’s indispensable.