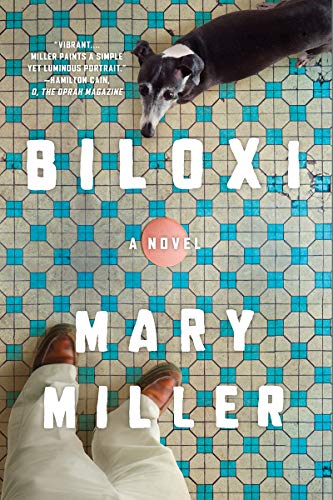 If you’ve read Mary Miller’s captivating debut, The Last Days of California—an eccentrically peopled coming-of-age tale—you might be expecting something similar from her second novel, Biloxi. Be warned: while the writing is equally outstanding and the plot’s as quirky as a bachelorette party in a convent, that’s where the similarity ends.

This time, instead of featuring an impressionable young girl trying to pick the right route toward adulthood in spite of her misdirected family’s bad examples, Biloxi’s protagonist is a misery of a man approaching the other end of the journey. But that’s not to say it’s the end: taking a literally different direction after catching sight of his ex-wife’s car leads 63-year-old Louis’s whole life in a different direction, too.

Instead of collecting his diabetes medication and a two-liter bottle of Pepsi from Walgreens, which is what he left home for in the first place, Louis ends up with Layla, a nervous lump of a dog who doesn’t make a sound unless she’s gagging. Which she does. Often.

Quite why he adopted her is a bit of a puzzle. “She didn’t look particularly smart or energetic or interested in me. In other words, she wasn’t anything you might want in a dog,” he says.

A FREE DOGS sign along with some delightfully described “drowsy balloons” tied to a mailbox lead Louis to his new canine companion. Announcing himself as Louis McDonald, Jr. to Harry Davidson, the dog’s original owner, Louis realizes it’s the first time he’s ever introduced himself so formally.

“Made me sound like I’d inherited something,” he says, which is exactly what he’s been hoping to do. “I liked it.”

Luckily, the curmudgeonly Louis McDonald, Jr. also likes the none-too-bright Layla which, given his gloomy disposition, is quite a surprise. From the contempt he shows his semi-estranged daughter Maxine, to his cavalier treatment of a boring though caring ex-brother-in-law, and even his behavior towards random strangers such as the elderly woman shopper on whom he purposely lets a store door close, Louis’s a pretty mean-spirited old man.

His life is a grumpy threnody to missed chances, lost love, and darn near everything else. Until he agrees to take Layla, that is, and bundles her into his car.

“I talked and talked and didn’t feel silly for talking to a dog, which was surprising. I turned to see if she was following along and she was, steadily gazing out the window. I imagined her running headlong into a pack of seagulls, the way they’d scatter. ‘We’ll go to the beach soon,’ I said. There we’d be, smiling at the other dog walkers, the bike riders and joggers . . . I had been living a very small and quiet life, but no longer! No longer would I live a small life; it might still be quiet—I had yet to hear Layla bark—but it wouldn’t be so small.”

As his dependence on Layla grows, Louis shares some outrageous plans with the dog. “You’re smart,” he tells her, clearly revising his earlier opinion. His reveries include loads of travel, adventure, and success with women, even his favorite large-chested newscaster who’s just interviewed someone from an animal shelter, which is surely a sign it could happen—as long as his inheritance money materializes, of course.

Louis’s late-life story makes for an often-frustrating read, particularly in the book’s early chapters. It’s hard to empathize with such a deliberately obnoxious protagonist. Occasionally, it’s impossible. The choices he’s made—in marriage, as a parent, a grandparent—as well as his churlish attitude, have clearly created most of his problems.

Unconditional love from a brand-new friend, even though it’s a furry one with an unpredictable gagging habit, inevitably cheers Louis up no end but fear not, in the skillful hands and off-kilter imagination of the talented Mary Miller, this quirky read steers clear of sentimental mawkishness.