The Billionaire's Vinegar: The Mystery of the World's Most Expensive Bottle of Wine 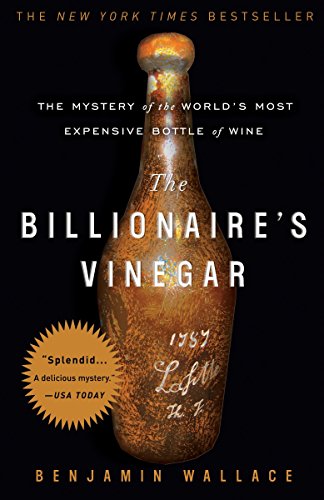 Once upon a time, the wine world was smaller, and much cheaper, than it is today. As late as the late 70s and early 80s, mere mortals could afford to buy Classed Growth Bordeaux and Premier Cru and Grand Cru Burgundy on a regular basis. A recent vintage Chateau Lafite Rothschild could be bought in the wine shop for $11 a bottle. Moreover, many wine shops carried much older vintages on their shelves, and Bordeaux wines from the 60s, and even the 50s, could be bought for less than what a Cru Bourgeois Bordeaux costs today.

Those days are long gone. A recent vintage Chateau Lafite-Rothschild costs between $600 and $1,300 a bottle, depending on the year. Even the lesser Classed Growths cost so much that one hesitates to buy one on a whim. Today’s wine-buying public has access to a far wider selection of wines, from all over the world, which are well-made and can be reasonably priced. But most people who might be interested will never, or rarely, have the opportunity to taste the great wines that used to be routinely imbibed. It seems like the world’s billionaires have bought most of them, driving up the prices to levels only they can afford.

The seeds were sown during that same era, when wine auctions became big business. Benjamin Wallace’s book, The Billionaire’s Vinegar, takes us back to those times, focusing on the auction at Christie’s, in London, on December 5, 1985, in which a bottle of 1787 “Lafitte” with the initials “Th. J.” engraved on the bottle, was offered. A German wine collector, Hardy Rodenstock, said that this was one of the bottles that had been discovered in a sealed basement in Paris when the house was being demolished, and that the “Th. J.” stood for Thomas Jefferson.

Even before the auction, researchers at the Jefferson Foundation at Monticello noted that Jefferson was compulsive about writing down a record of all of his transactions, and these bottles appeared nowhere in his records. They doubted its authenticity. But Michael Broadbent, the head of Christie’s wine department, decided that the weight of the evidence favored the bottle being the real thing, and Christie’s auctioned the bottle as a 1787 Chateau Lafite that had been owned by Thomas Jefferson. The wine therefore had the triple attraction of being a Lafite, being really old, and being historic. It sold for a record-breaking $156,000, after a bidding war between Marvin Shanken, the publisher of Wine Spectator, and Kip Forbes, a son of Malcolm Forbes ordered by his father to acquire the bottle. Forbes won the bid, but was the bottle really what it purported to be?

Wallace deftly writes his story as a mystery. We find ourselves reading raptly to the end to see whether the authenticity of the Jefferson wines is established one way or another. Wallace takes us far beyond that one auction in both the past and future, weaving his story lines together in a way that makes his many digressions seem like relevant background to his main theme.

He describes how Jefferson had come to be in France just before the French Revolution, how he made himself a true connoisseur of French wine, including Burgundy and particularly Bordeaux, and how he bought large quantities to be consumed while there and shipped back to America.

He describes how it came to be that there were substantial quantities of Bordeaux, particularly of Lafite and several other wines, from the nineteenth century, available in the second half of the twentieth century. The English were particularly fond of these wines, and bought barrels (or later bottles) of them for storage in the basements of their mansions, where not all were consumed and many lay undisturbed. Michael Broadbent, of Christie’s, was particularly adept at finding these caches, and having them put up for auction, starting in 1966.

As people discovered that grandfather’s old wine collection might be worth something, more and more old wine became available. Prices of the old wines with the best pedigrees began to rise. It quickly came to the point that most wine lovers would not be able to afford them, but they could still come to the wine auctions, such as the Heublein wine auctions in the United States, where Broadbent would open up some samples. Even those who could not hope to bid on them would line up with their glasses, have Broadbent pour out of thimble-full of wine, and immediately go back to the end of the line to wait for the next sample. That way, they could forever tell whoever cared that they had tasted an 1830 Madeira, an 1865 Burgundy, and an 1874 Lafite.

A whole new crowd, especially in the United States, became serious wine collectors, amassing thousands of bottles. With the opening up of the old cellars, these collectors could put together “vertical” tastings (the same wine from different years) that not even the wineries could reproduce. A Texas neurosurgeon put on a 47-vintage tasting of Chateau Latour in 1976, followed by a 36-vintage tasting of Lafite-Rothschild in 1979, presided over by Michael Broadbent and Baron Elie de Rothschild. Each mega-tasting would lead someone to try to top it, and by 1988, a New Orleans aerospace consultant put together a 115-vintage tasting of Lafite.

Demand exceeded supply of these wines, and prices skyrocketed. But just when there seemed to be no more 1924 Chateau Mouton, some more seemed to show up. Where were they coming from? People began to notice that some of the wines just did not seem to be what the labels said.

Wallace discusses these concerns while concentrating on the efforts to determine the authenticity of the Jefferson bottles. A number of the Jefferson bottles were opened in the late 1980s, and many of the wine luminaries—Michael Broadbent, Serena Sutcliffe, and Robert Parker among them—tasted them. They gave glowing reports. Wine tastes differently when one thinks one knows what it is. Later, a number of Jefferson bottles were subject to various scientific tests to try to determine the age of the wine and bottle. But Hardy Rodenstock remained cagey about the circumstances of his acquiring the bottles.

Wallace seems to have come to this project already knowing about wine. Few false notes are detected. It must have been fun for him to have an excuse for interviewing all of the wine people that we read about, but he shows an objectivity that makes it clear that he is not interested in being welcomed into the wine world.

After giving the author a pleasant interview and a lovely lunch at the exclusive English club Brooks’s, Broadbent does not come off well in Wallace’s book. Broadbent subsequently sued Wallace’s publisher, Random House, for defamation of character, and in 2009 the suit was settled with Random House agreeing that the allegations were without foundation, withdrawing the book from the UK, and paying Broadbent—but it continued to sell the book in the rest of the world without changing it.

Serena Sutcliffe is characterized by Broadbent as “pretentious.” Wallace reports that Jancis Robinson over-indulged at a tasting of Chateau d’Yquem (a massive vertical tasting put on by Rodenstock at Yquem itself), and left her tasting booklet at the chateau. Many other celebrities of the wine world make cameo appearances. But the task of putting together an index, which is missing, might have exposed some editorial inconsistencies. For example, Edmund Penning-Rowsell is mentioned several times in the book but not identified until page 160 as “the dean of English wine writers.” Only 33 pages later, Hugh Johnson is described as the “dean of English wine writers.” But overall, the description of the wine world and its inhabitants rings true.

The growing problem of counterfeit wine is not something that the great majority of us need to worry about, and it is sometimes hard to feel sympathy for people who are rich enough to afford to buy these wines. But The Billionaire’s Vinegar goes beyond that narrow issue, giving us an insight into the wine world of today, when a select few wines have been pushed into price realms that have put them out of our reach. We are poorer for that.