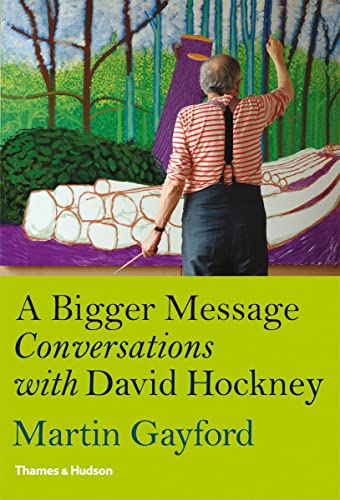 “Would that the publisher have gone on the complete journey with Hockney and Gayford and made this the large-scale volume that it deserved to be so that the art could have been as easily absorbed as the wit and wisdom in the words.”

It’s a wonderful thing when one is given the chance to look at the world through the eyes of an artist, to understand the idea and image of a tree, for instance, from an individual artist’s point of view.

This is the gift we are given in the new book A Bigger Message: Conversations with David Hockney by Martin Gayford.

Art critic and journalist Martin Gayford early on establishes and easy and gentle dialogue with the famed artist, one that allows each to express himself on topics far removed from canvases and paints, topics ranging a consideration on the gender of trees to Hockney’s love of technology, and his “struggle with photography,” to put it into Gayford’s words, his desire to blend media into an ever-more-potent visual statement.

Also thrown in the mix are Hockney’s attraction to what Gayford refers to as “wiggly roads” and the ways in which the writings of John Rechy influenced the painter’s work. Not even the films of Walt Disney are exempt from comment, as here, where David Hockney states:

“Do you remember Walt Disney’s Fantasia? In the original version, they used Stravinsky’s ‘The Rite of Spring’ for one section. But they didn’t get what Stravinsky’s music was about—they used dinosaurs trampling about.

It struck me that the Disney people had been in southern California for too long. They had forgotten northern Europe and Russia, where you go from winter to everything forcing itself up through the earth. That is the force in Stravinsky: not dinosaurs pushing down, nature coming up!”

In recent years, David Hockney himself came to feel that he had been in southern California for too long. After three decades of life in Los Angeles—a time in which he produced major iconic works, often featuring the ubiquitous Hollywood swimming pools—Hockney has recently returned to Yorkshire, England to be near his mother and his sister, Margaret. And the transition in locale has brought with it both a transition in the subject matter of the artist’s work, and a re-invigoration of the artist himself, such as here, where they discuss the creation of original art on an iPhone:

MG: “How do you actually draw on the screen? It’s very small.”

DH: “I’m drawing them mostly with my thumb. You can’t draw them with your thumbnail because I think it reacts slightly to heat. I use some collage techniques; finally I got rather good at it. It takes a while to do that, but I’m willing to spend some time. IT takes three months? Fine, let’s have a go. At my age, it’s exciting.”

MG: “Is it influencing the way you draw. It looks as if it is.”

DH: “The iPhone makes you bold, and I thought that was very good. I’ve looked at them blown up on a big screen, and they made me very excited because you didn’t have any loss of colour, and instead of the finger doing it, it look as if you were doing it with your arm swinging around, trying to find the minimum number of marks need to do something.”

And, as David Hockney as discovered, if the iPhone makes for an excellent artist’s medium, the iPad goes it one better. As Hockney concludes: “Picasso would have gone mad with this.”

A Bigger Message makes for marvelous reading, for artists and non-artists alike. The section dedicated to the discussion of photography, begun with a consideration of Hockney’s masterpiece “PearBlossom Hwy,” is as fine a discussion of the twin arts of painting and photography as one is likely to find anywhere, especially in that it includes Rodin’s quote, “It is the artist who is truthful and the photograph that lies,” and then gives lie to that comment through a consideration of the work of Cartier-Bresson.

Not to be missed in particular is the chapter called Van Gogh and the Power of Drawing. The discussion here is sparked by the 2010 exhibition at London’s Royal Academy entitled “The Real Van Gogh,” and reveals the passion that each of the men, artist and critic alike, feel for Van Gogh’s works, as here, where David Hockney comments:

“I think van Gogh was one of the great, great draughtsmen. I love the little sketches in his letters, which seem like drawings of drawings. They are condensed versions of the big pictures he was painting at the time, so that Theo and the other people he was writing to could understand what he was doing. These days, he’d be sending them on his iPhone. When you look at them, they contain everything. It’s all there. He certainly didn’t do anything by halves.”

In A Bigger Message, nothing is done by halves. Both the interviewer and the artist interviewer share candidly and insightfully, giving us a manuscript that is thoughtful, educational, and passionate. If there is to be a quibble with the book, a complaint, it is not with the words, but with the pictures.

If half the value of this book is in its words, the brilliant language contained within, the other half is in the reproduction of the artwork of David Hockney and other masters, including Constable, Claude Lorrain and, of course, Vincent van Gogh. Yet this is where the publisher fails the reader. Although the book is printed on excellent paper stock, the size of the book itself and therefore the size of the color plates included are skimpy. This is in spite of the fact that the book itself boasts “161 illustrations, 154 in color.” Worst of all, with printing a series of works such as “Midsummer, East Yorkshire, 2004,” the plates are so very small that they resemble nothing so much as thumbnails on Internet art sites, leaving the reader attempting to click on the pictures to enlarge them, but to no avail.

Ironically enough, the only pictures in the book that are published life-sized are those created on the aforementioned iPhone. Somehow, that doesn’t seem right.

Would that the publisher have gone on the complete journey with Hockney and Gayford and made this the large-scale volume that it deserved to be so that the art could have been as easily absorbed as the wit and wisdom in the words.