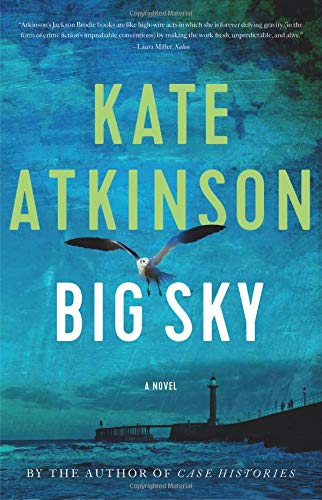 “A satisfying, indulgent, binge book guaranteed to release a flood of pleasurable endorphins.”

This is the fifth book in Kate Atkinson's Jackson Brodie Series, but you won't have to read the first four—though you should—because Big Sky does the job as a standalone.

It's the kind of book that invites readers to kick off their shoes, put up their feet, and settle into their comfiest reading chair with snacks and beverages close at hand in order to minimize the number of interruptions required to get up for refills.

It's that good. Really.

Especially for readers who like the kind of mystery that starts out with seemingly unrelated storylines that gradually, cleverly, ever so slowly and surprisingly begin to intersect. Not simply unconnected story threads, more like tendrils, separate but firmly attached to a central notion.

Reviewers have shied away from giving away much of the plot as it is an extremely complex one involving sinister elements. The focus has been on, as it is here, the stellar writing, the story development, the delicious dialogue, and the characters who walk off the page to sit across from you or on the edge of your bed as you read, nodding approvingly with every turn of the page.

It's Jackson Brodie's day with his son Nathan as he patiently attempts to coax Nathan's attention away from his iPhone to the World War II historical site they are visiting:

"Nathan met any information conveyed to him by either rolling his eyes or appearing to be deaf . . .

"'You wait," Jackson said. 'One day you'll have kids of your own and you'll find that you make them do all the things that you currently despise—museums, stately homes, walks in the countryside—and they in turn will hate you for it. That, my son, is how cosmic justice works.’

Exchanges like this will bring either smiles or smirks to parents of teenagers.

Career wise, Brodie has gone from soldier to police inspector to private investigator. As such, his workload has mellowed along the way into debt collection, following wayward spouses, employee theft, and background checks, a slower paced work life befitting the small, quiet village of North Yorkshire where he currently resides.

Crystal Holroyd, married to wealthy Thomas Holroyd ("a financial arrangement"), thinks she's being followed, and wants Brodie to find out who it is.

"She was pretty sure it was the same car she had noticed yesterday when she had given Harry a lift to Transylvania World. And then prowling after her as she came out of the car park in Sainsbury's. And then again later in the afternoon when she'd popped out to pick up the dry cleaning. Too many times to be a coincidence . . ."

But the tranquility of North Yorkshire is deceptive. As Brodie goes on what he assumes will be a solitary, soul soothing run through the woods, listening to Miranda Lambert on his headphones singing about drink and sex and heartbreak,  he encounters a man standing on the edge of a cliff:

". . . The man took a step nearer the edge and the shale underfoot fell away in a little shower. . . . He took another step . . . And then another. Jackson disobeyed his own rules and made a lunge for the man, grabbing him in a kind of clumsy bear hug so that the standing man and the running man became one as they went over the edge together . . ."

And thus, Brodie is drawn deeper into a sphere of wickedness.

An opening chapter is a cautionary tale about the enticement of too-good-to-be- true job offers. It should be read by all parents of daughters, and by the daughters themselves. It eventually leads the reader to this:

"Anderson Price Associates was the official shiny recruitment face of the operation. Andy's firm, Exotic Travel, funneled the girls into the country. . . .

"They weren't press-ganged or shanghaied off the street, they came of their own free will. They thought they were coming to real jobs—nursing, accountancy, care homes, clerical work, translators, even. People sold bread or shoes or cars.

Anderson Price sold girls . . . After all, who was going to suspect a bunch of middle-aged white blokes in a seaside town . . . ?"

So, yes, the plot at first might seem to be all over the place, but don't be fooled.  The author knows what she's doing, and if you can ignore the annoying overabundance of parenthetical asides, you will find this to be a satisfying, indulgent binge book guaranteed to release a flood of pleasurable endorphins.

Be sure to check out the early Jackson Brodie books, as well.