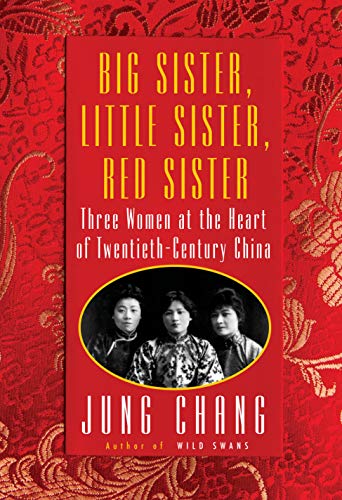 “The reader should be prepared for an extraordinary though long and very uneven ride.”

A new publication by Jung Chang is always an event, though those who have read and admired her previous books, particularly, The Empress Dowager Cixi: the Concubine who Ruled Modern China (Vintage, 2014) will perhaps be disappointed by this chronicle of the Soong sisters.

The sisters of the title are the Soongs: Ei-ling (Big Sister) (b.1889), Ching-ling (Red Sister) (b.1893), and May-ling (Little Sister) (b.1898), daughters of a man who was the first Chinese to be converted to Methodism in the American South, and a mother who was a member of “China’s most illustrious Christian clan.”

The girls’ father, Charlie Soong, who was born in poverty in China but spent the early part of his life in the States, married into the Shanghai upper class, and wished all his life to make China more like the USA. Charlie, who was illiterate in Chinese, sent his daughters to be educated in the USA, where they naturally acquired their first language, and a life-long preference for the American lifestyle, particularly as lived in Manhattan. Charlie Soong was an early supporter of Sun-Yat Sen, (who became his son-in-law[J1] ), and as we learn incidentally much later in this long book  a collector of old brandies .

This is not a straightforward feminist fable by any means and Jung Chang’s attitude toward the sisters, and her coverage of them often seems ambivalent. She considers that the main factor behind their status as “modern China’s ‘princesses’”—a difficult concept in itself—was their “extraordinary marriages,” following on their privileged upbringing, and the political involvements of their father.

Ching-ling married Sun Yat-sen who pioneered the Republican revolution that overthrew the Manchu monarchy. Sun’s successor, Chiang Kai-shek, married Mai-ling and went on to form the Nationalist government that ruled China until the Communists drove him out to Taiwan in 1949.

Big Sister, Ei-Ling, married H. H. Kung who became Prime Minister and Foreign Minister for his wife’s brother-in-law, Chiang Kai-shek, and not incidentally helped his wife to amass an important fortune through his contacts and knowledge as Finance Minister. Ei-ling used her ill-gotten wealth to provide cashmere and other luxuries for her sisters when they were feeling the pinch, a very relative concept for all of them.

However, Jung Chang also considers that the sisters were “clearly exceptional beyond their influential marriages” though the evidence she provides for this are the rumours that Little Sister (Mai-ling) “bathed every day in milk to keep her skin luminous” when milk was considered a luxury beyond the reach of the average family, and that Red Sister (Ching-ling) had an affair with her bodyguard.

We learn in the introduction to the book that Jung Chang had intended for many years to write about Sun Yat-sen, and not the Soong sisters, who unlike Sun were not “programme-setters and history changers.” This surely helps to explain why Sun dominates almost entirely the early chapters of the book.

As is to be expected, Jung Chang shows her usual expert grasp of the ebb and flow of historical events across several countries and continents, though it would be helpful for readers less conversant with these facts to have included a timeline of key historical events, and a cast of main characters.

In the early chapters the sisters move in and out of the action in a sometimes confusing manner, and it is not until later in the book where the spotlight is placed on individual sisters in turn, that it is possible to gain some more solid understanding of their characters and relationships.

The author’s apparent ambivalence about her subject matter makes for an often-bumpy ride, though, in fairness, she is perhaps just trying to give a rounded picture of the complex character and position of the sisters.

On the one hand she quotes admiring remarks from presidents, prime ministers, generals, and award-winning journalists about the sisters’ brilliance, elegance, femininity, and influence; and in the next paragraph describes in detail their “feet of clay”; corruption, disloyalty, and dedication to conspicuous  consumption (palaces, silk sheets, foreign dogs, furs, jewels etc) amidst poverty.

Though Ching-ling and Mai-ling in particular are shown to have also braved physical danger and hardship in support of the causes and husbands they espoused, it is hard to escape the conclusion that educated, sophisticated, and very importantly English-speaking as they were, they were very often used—even pimped!—by male political figures;. Mao Tse-tung, for example, used Ching-ling (Red Sister) to cultivate President Sukarno of Indonesia who had dedicated a song to her; and tried, less successfully to use her to influence her brother-in-law Chiang Kai-shek and the Nationalists in Taiwan.

The book juxtaposes detailed reportage of wars, conferences and political movements, with slang expressions and novelette-ish anecdote. Chiang Kai-shek is stated to have been “a lecherous lout;” “the warm pee (of her adopted daughter) stirred to life a sensation in Chin-ling;” and “Ei-ling’s reputation as someone who took advantage of China’s war to line her pockets had already being doing the rounds.”

Many passages read like the author’s jotting down a few thoughts to be expanded upon later by a team of researchers, and groomed by an editor, but not to be released as is. The reader should be prepared for an extraordinary though long and very uneven ride.