The Big Screen: The Story of the Movies 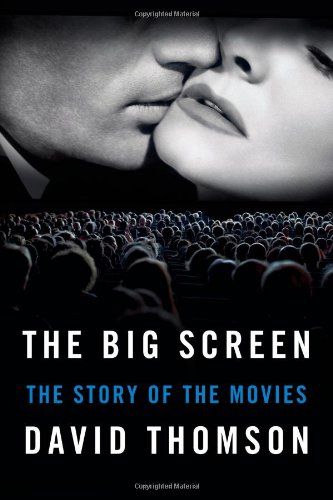 “For any film student, cinema scholar, or movie fan . . . The Big Screen is not to be missed.”

Like they did with Charlton Heston’s gun, one day they’ll be prying my copy of David Thomson’s The Big Screen out of my cold, dead hand.

To the point: not since Pauline Kael’s semi-annual screeds in the pages of The New Yorker has there been a writer who has examined the filmmaker’s art with the intelligence, wit, and unbridled passion that David Thomson does, both here and in previous books like The Whole Equation and “Have You Seen . . . ?”.

And no one since Marshall McLuhan has given film its contextual due within the culture of the moment. As Mr. Thomson himself succinctly states by way of explanation for this text:

“It’s the story of the movies, but it begins with still photography and comes up to Facebook and all the screens in our lives today.”

Screens, you see, are important.

“This book is an attempt at history, but it leaves many things out, and sometimes moves sideways, despite an overall belief in a steady, forward narrative. From the early days of movies, it cuts forward to events as recent as Pretty Woman or Cold Mountain . . .

“So it’s a history of moviemaking, it’s atmosphere as a bittersweet collaboration, and its impact on our larger culture, but it tries to describe a theory of screens, too, which is not as cheerful or carefree as Fred Astaire. We used to believe the screen was there just to help us to see the pictures, the story, and the illusion of life. But we are warier now and we guess that all these screens are the real thing, fabulous tools, of course, but subtle barriers between us and life.”

Thus myriad screens in our lives both unify and separate. And by their size, shape and locale, they largely define the images that they contain and shape our perception of them.

As here, in this moment, in which Mr. Thomson both appreciates the love that the viewer has for the film art while at the same time being somewhat flummoxed by his choice of screen:

“I know a sixteen-year-old so entranced by [Terrence] Malick’s The Tree of Life that he watched it five times in a couple of months, always on his computer screen. The film was still playing in theaters where he lived, but he had no interest in seeing it there. I like that kid (he is a young man now), but I feel he and I are not quite of the same species.”

The Big Screen is the rare book on film incorporating all the ways in which film is seen, from the “plush velvet darkness” of movie palaces past to the television in the bedroom to smart phones here, there and everywhere; and from pristine restored versions of classic films shown on Turner Classic Movies to film seen through a more cynical and deconstructionist media filter:

“On YouTube there is a short version of the Al Pacino Scarface. It is 1 minute and 40 seconds, and it is all the uses of ‘fuck’ in the film. This joke went up in 2006 and six years later it has had 1.9 million hits. Scarface is a pretty good nasty entertainment: its marriage of violence and flash makes rascals of us all. But the short version reappraises it in so thorough a way I’m not sure I have time now for the long version.”

The question arises as to how exactly the experience of film watching morphs from screen to screen? How does the experience of Braveheart, for instance, change from seeing it on a 40-inch flat screen television or on the smaller screen of an iPad?

How does the addition of advertising on commercial television impact the experience of Rushmore? And what, for God’s sake, does slowing down a presentation of Alfred Hitchcock’s Psycho to an ultra slow two frames a second, resulting in a film an entire day long in an experiment in media called “24 Hour Psycho” do to our understanding of the filmmaker’s art?

“The deliberation of ‘24 Hour Psycho’ allows us so much more access to time, repetition, and the mechanics of filmmaking. I believe Hitchcock would have welcomed this ‘invasion’ and watched it endlessly, for it’s a lesson in his way of working in advance. It seems like a dreamy, nearly infinite rehearsal for the film, as well as a distant, inching memory of it. It makes Psycho feel ancient, like the cave paintings in Werner Herzog’s Cave of Forgotten Dreams (2010)—the perfect description for the great film archive.”

Which is not to say that The Big Screen is all media and no film.

As the title of the epilogue, “I Wake Up Screening,” attests, Mr. Thomson is steeped in the visual image, blinded by the projectionist’s light. His is a film lover’s view of film, complete with swoon; his viewpoint is that of someone with an unhealthily high degree of cellulose flowing in his blood.

And so even when he is simply tossing out a few factoids (that, for instance, Orson Welles was the original actor selected for the voice of Darth Vader, but that it was ultimately felt that his voice was too recognizable, even though, as Mr. Thomson puts it, Welles’ speaking voice was that of a “ruined angel.”), he does so not to prove his academic clout, but instead to share something great, something that you really ought to know.

And share he does—wonderful stuff, from the moment that a magician named George Melies was told by the Lumiere brothers not to invest in moviemaking in that “It is an invention without a future,” onward. Onward through Erich Von Stroheim (the tale of how he met Dietrich and how their love story paralleled the plot of The Blue Angel especially lingers in the memory) and Howard Hawks and John Ford and John Huston and Orson Welles and Vincente Minelli (“the most domesticated director”) and Michael Curtiz (“the guy who could shoot anything”) and Nicholas Ray and John Cassavetes and Robert Altman and Francis Ford Coppola and Brian De Palma and George Lucas and Martin Scorsese and Steven Spielberg and Oliver Stone and always and especially Billy Wilder and on and on.

To all of them, to all the directors, underrated or overrated, understood of misunderstood, to all of them and to all those who strive to direct or to act in, or write, or produce films, the author gives a simple word of advice:

“If you want to make art, don’t give up your day job.”

And about that “art” part, there’s this:

“Moviegoing, for decades, was people sitting in the dark, bathing in the spill of light from the screen and the possibility it afforded of a perfect or improved life…You are not watching life. You are watching a movie. And if, maybe the movie feels better than life, then that is a vast, revolutionary possibility, and no one knows yet whether it is for good or ill, because the insinuation of dream does so much to alter or threaten our respect for life. Dissatisfaction and doubt grew in step with film’s projection of happiness.

In other words, concerning the merit and value of films, the jury is still out. And yet the nature of the art form continues to evolve. Even the definition of “movie” has shifted and continues to shift, ever since the films themselves escaped from the moviehouses and showed up in our homes, on the misaligned aspects of the television set. Now, as the visual image flows across various screens (screens being, we are told, “patient, available, uncritical”) the image shifts, and the eye with it.

A complex thesis to be sure, but one explored in a most satisfying manner in the pages of The Big Screen. As a study of a topic explored so many, many times before, it inhabits the core meaning of the word essential.

For any film student, cinema scholar, or movie fan (See page 349 to learn why Steven Spielberg, while making Jaws, said, “I don’t want to make a film, I want to make a movie.”), The Big Screen is not to be missed.